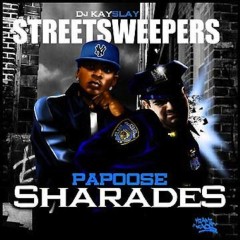 Shamele Mackie, better known by his stage name Papoose /pæˈpuːs/, is an American rapper. After breaking into the rap game in 2005 with DJ Kayslay with the release of his song "Alphabetical Slaughter" he signed a 1.5 million dollar contract with Jive Records. After his debut studio album, The Nacirema Dream would be shelved and he would cut ties with Jive. This would result in him releasing over a dozen free mixtapes to keep himself popular. In 2012 he secured a deal with Fontana Distribution and released his debut album independently on March 26, 2013.
Papoose became known to the public when he appeared in 1998 on Kool G Rap's Roots of Evil album. The following year, he released his first single, "Thug Connection"/"Alphabetical Slaughter".
After an early record deal failed, he decided to produce and sell his own mixtapes, one of which he presented to DJ Kay Slay outside the offices of New York's Hot 97 after the latter's radio show there. This led to Kay Slay inviting Papoose onto the air, and, impressed by his rendition of "Alphabetical Slaughter", signing him to his Streetsweepers Entertainment label. He continued to release mixtapes at a prolific rate – over a dozen between 2004 and 2006 – and won the Justo Mixtape Award for Best Underground Artist in 2005.
August 24, 2006, his official website announced that he had signed with Jive Records in a deal worth $1.5 million. An album to be called The Nacirema Dream ("American" spelled backwards) was planned. However, in September 2007, Kay Slay revealed that he and Papoose had left Jive, commenting that they had "almost [become] victims of A&R hell." On 21 Gun Salute, Papoose said that he was able to keep the $1.5 million despite not releasing an album.

He first came to prominence after featuring on the "Touch It" remix by Busta Rhymes. he was briefly associated and signed to Flipmode for a couple of years thereafter.

Since then he has released various mixtapes keeping his name out there with the most recent one being Most Hated Alive which was released December 4, 2012. His debut album The Nacirema Dream was scheduled to be released March 5, 2013. In promotion of the album he released "On Top of My Game" which features Mavado as a single on December 11, 2012. The music video premiered on 106 & Park on February 1, 2013. The release date was however pushed back another three weeks until March 26, 2013
In 2008, Papoose and his cousin James Phelps (stage name Young Purp) issued a statement saying that he and fellow rapper Remy Ma were to be married, but due to Ma's impending jail sentence of potentially up to 15–25 years, that the couple had changed their plans and intend to marry in prison instead. Papoose planned to wed his fiancee while in prison, but the wedding was called off for one day after he attempted to smuggle a key into prison on their wedding day in May 2008. After the incident, Papoose married Ma the next day inside the courtroom right before sentencing and was barred from visiting her for six months. He has a daughter named Dejanae Mackie. Since then they have conjugal visits every six weeks and Remy Ma will be released in 2014. He is of Liberian Descent.