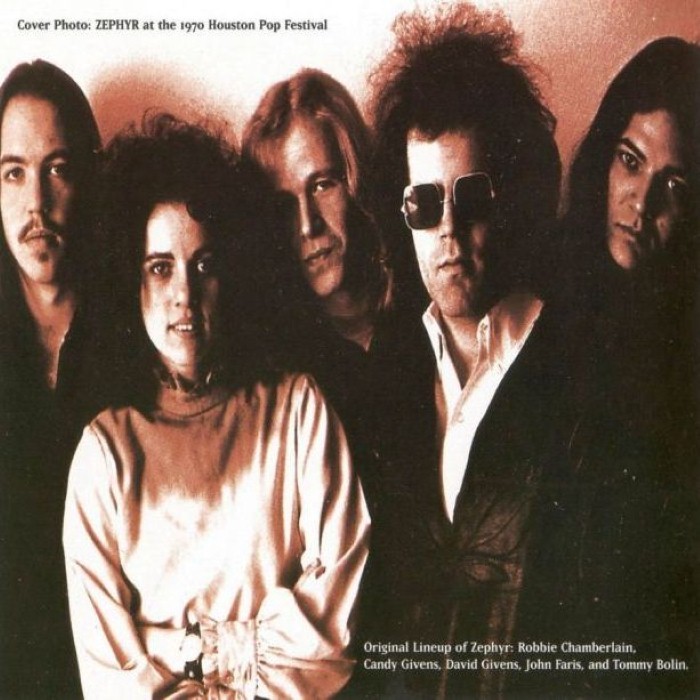 "Zephyr" The original Zephyr was formed in Boulder, Colorado in late winter of 1969 when Candie and David Givens of the band Brown Sugar joined with Tommy Bolin and John Faris of the band Ethereal Zephyr. They acquired drummer Robbie Chamberlin and went on to record their first album with ABC Probe in 1970, their second with Warner Brothers in 1971, and their third, SUNSET RIDE, following the departure of all but Candie and David, again with Warner Brothers. This last album features a less bluesy and more country/folk side of the band. ( Guitarplayer Jock Bartley showed up in Gram Parson's Fallen Angels a year later and can be heard on the live album "live 1973".) They were all midwesterners, all under 21 when they started. Classic mismanagement led to their early destruction. People who saw them at their best know the truth. Tommy Bolin went on to international stardom when he joined Deep Purple replacing Ritchie Blackmore in 1975 and died a year later. Candie Givens sang in a variety of bands and died in the 80's. The late Tommy Bolin, who died of a drug overdose in a Miami hotel room in December 1976, was a gifted guitarist probably best remembered for his brief tenure in The James Gang and Deep Purple. But Bolin participated in other artists' recordings as well, and recorded two solo albums before his death at the age of 25. The work he left behind suggests that he had much more to offer. At the age of 18, Bolin was the guitarist for the hard rock band Zephyr, and played on the first two of their three albums. The band's self-titled 1969 album is now out of print. Zephyr's music was a mixture of heavy metal, jazz, and blues, and was at times similar to that of the first Led Zeppelin album (released the same year). But Bolin had more discipline and virtuosity than Jimmy Page did. The lead vocals of the late Candy Givens (who drowned in a hot tub while under the influence of drugs in 1984) were sometimes over the top; the appeal of her Janis Joplin-like wailing may depend on your mood. But Bolin's guitar-playing is excellent, making Zephyr well worth discovering. Bolin also co-wrote five of the album's eight tracks.