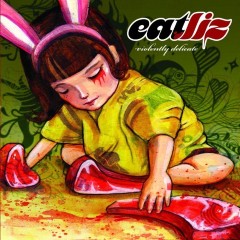 Eatliz is one of Israel's leading alternative rock bands, which earned its strong cult following of indie rock fans by the band's outstanding intense and extensive live performances. Eatliz is also known for its internationally awarded music videos and for reinventing itself in every live show, where the stage is a playground and every show is unique. Eatliz unconventional approach to music makes it tough to label with a genre as every song of the band is an adventure, a toy to be played by the skilled hands of the band members, and a genuine declaration of originality and vision. Eatliz's debut album "Violently Delicate" was released in Germany, Switzerland,Austria and Israel by Anova Records to a wide critical acclaim in 2008 and was played constantly in Israel's biggest radio stations, while 'Attractive' got a massive radio airplay in Germany as well. This led to an invitation on behalf of the Popkomm festival 2008 to play a showcase. The album was promoted with two worldwide awarded spectacular music videos - 'Attractive' and 'Hey'. Attractive was chosen to promote the luxury MTV Artists Spot that was made on the band, and also won the 'Ourstage' website grand prize, as voted by fans all over the world. Hey participated at over 75 worldwide music video and film festivals, and won 9 international awards, including the Spike Lee Award at Babelgum competition at the Tribeca film festival. Both videos got a massive web buzz with countless blog reviews, gained over 500,000 views in Youtube only and were featured at dozens Youtube local channels. The music of Eatliz is described by the band members as 'complicated pop', as the band's songwriting is eclectic and combines various of influences, from soft pop to hard-rock elements, brings to mind bands like Mr. Bungle, Sleepytime Gorilla Museum, Bjork, Portishead and Cardiacs. The variety of styles the band combines in a single song, has helped them gain fans of many genres, crossing ages and countries to one distinctive sound. Eatliz released an EP of outtakes from the first album titled 'Delicately Violent' in November 2009. The beginning of 2010 will see the release of a second album of new materials with Anova Records and a European tour to support the release. Such an exceptional fantasy! Cuddly yet powerful, That's Eatliz for you. Links: Eatliz official Website Eatliz Myspace Eatliz Facebook