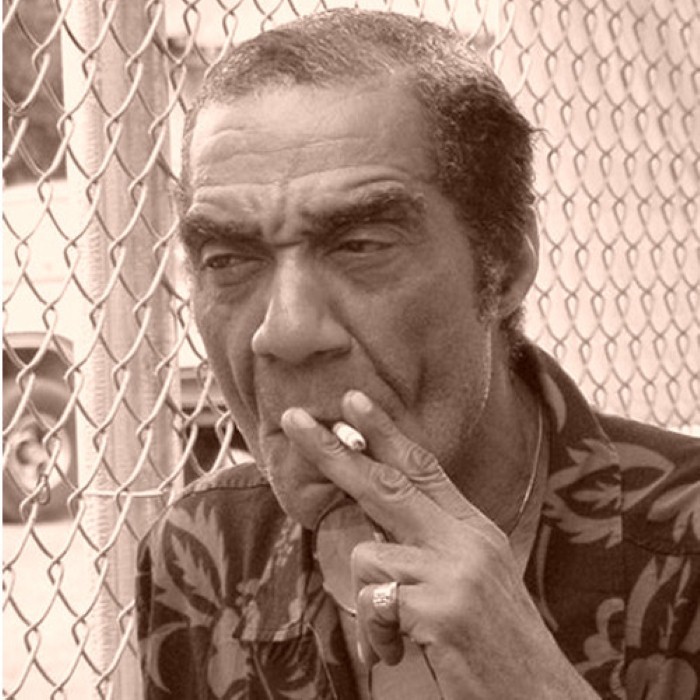 Andre Williams (born Zephire Andre Williams in Bessemer, Alabama, on November 1, 1936) is an American R&B and punk blues musician who started his career in the 1950s at Fortune Records in Detroit. Some sources believe that Williams is the long-lost brother of Screamin’ Jay Hawkins, a blues musician whose song “I Put A Spell On You” landed on the Rock and Roll Hall of Fame’s 500 Songs that Shaped Rock and Roll charts.

He lived in a housing project with his mother until she died when he was only six years of age. Even though he was sly and was strangely smart as a young boy, his “aunties” raised Mr. Williams until he was around 16. At sixteen, Andre Williams set out on his own and moved to Detroit, Michigan. There, he became friends with Jack and Devora Brown, owners of Fortune Records which was located at the back of a barber shop.

He then became lead singer for the 5 Dollars in 1955, which already had a contract with Fortune Records. Though most of the songs were billed as Andre Williams and the Don Juan’s, “Bacon Fat” and “Jail Bait” were solo efforts. “Bacon Fat” hit #9 on the Billboard R&B Charts in 1957. “Bacon Fat” was such a success that Fortune Records sold the song to Epic Records, a much larger distributor! Since “Bacon Fat’’ and “Jail Bait” were such successes, Williams figured that “talking instead of singing” was a better idea for him, for he didn’t have as good a voice as some other singers from the 1950’s. In 1960, Fortune released a complete LP, of all of his singles with the Don Juan’s, which was titled Jail Bait. This was just the start of William’s nationwide fame…

In the early 1960’s, Williams co-wrote Stevie Wonder’s first song called “Thank You for Loving Me.” Andre Williams’ “Shake a Tail Feather” was also made a super hit in 1963 by the Five Du-Tones and again by Ike & Tina Turner. Alvin Cash & the Crawlers also made a hit out of the Williams song “Twine Time.” As well as making these hits, Williams also supervised the making of 2 or more albums by the Contours. In the ‘60s, Andre Williams was the manager and roadie for soul singer Edwin Starr as well.

In 1965, Williams was signed to Chess Records, Chicago’s major blues label. He was back…wearing velvet lavender suits and playing “bucket-of-blood” styled joints. Chess released many hits for Williams—“Humpin’ Bumpin’ and Thumpin’” and “Cadillac Jack” in particular. Then, he began to work with many unknown black labels and pour out songs like “Sweet Little Pussy Cat” and “Rib Tips, Pts. 1 & 2.” In 1968, Williams collaborated with the Natural Bridge Bunch to release “Pig Snoots,” a novelty-song about a man named Ricky who “come all way cross town to gimme some snoots!” In the 1970’s, Williams wrote some songs for Parliament (band) and Funkadelic, two popular funk groups. (Comedian Redd Foxx then dubbed Andre Williams his most famous nickname, Mr. Rhythm). Once more Williams began to produce cuts for Ike Turner, who then gave Williams some cocaine.

Throughout the 1980’s, Andre Williams was in poverty because of his drug addictions. He lived in Chicago, Illinois; at one point, he was begging for money on a Chicago bridge! Andre Williams’ homelessness would forever change him.

However, this did not stop Mr. Williams’ dignity. In 1996, Andre Williams released Mr. Rhythm, which featured new renditions of his old tunes from the “Jail Bait era.” Some included “The Greasy Chicken,” “Mean Jean,” and “Pass the Biscuits Please.” It was a definite comeback for Mr. Williams, but the most of the crowd had already forgotten about him, and wanted newer-styled music! Andre would try to suit their tastes if the wanted him to!

In 1999, he recorded a country album with the Sadies, called Red Dirt.

In 2000, Andre Williams plotted against the critics once more with The Black Godfather. The noisy, electric, fuzzy sound was back! By this time, Andre was already back on stage, performing at the “bucket-of-blood” clubs again. The Black Godfather became his new title, along with the outdated Mr. Rhythm. The punk crowds went crazy!

But seeing that his albums were not musical enough for critics to praise and that he wasn’t making great music anymore, Andre tried to bring back his soul with Aphrodisiac in 2006. “The result is a more laid-back and funky groove that’s soulful but potent at the same time, fusing ’70s blaxploitation sounds, Jimmy Smith-style jazz figures, and Booker T.-influenced R&B workouts into one solid package” is the way Mark Deming puts Aphrodisiac.

He still plays shows in the USA, and toured Europe in 2001 (with Dutch band Green Hornet as backing band), 2005 and 2006 (with the Marshall Brothers). From August to November 2006, he had a short European tour, ending in Switzerland. His most recent tour dates were not posted yet.