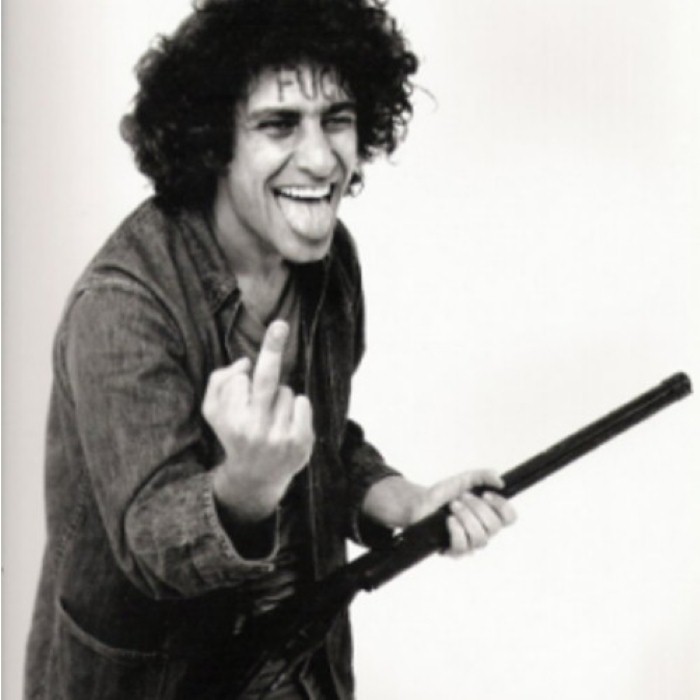 Abbott Howard “Abbie” Hoffman (November 30, 1936 – April 12, 1989) was a social and political activist in the United States, co-founder of the Youth International Party (“Yippies”), and later, a fugitive from the law, who lived under an alias following a conviction for dealing cocaine.

Hoffman came to prominence in the 1960s, but practiced most of his activism in the 1970s, and has remained a symbol of the youth rebellion of that decade.

Prior to his days as a leading figure of the Yippie movement, Hoffman was involved with the Student Nonviolent Coordinating Committee (SNCC), and organized “Liberty House”, which sold items to support the Civil Rights Movement in the southern United States. During the Vietnam War, Hoffman was an anti-war activist, who used deliberately comical and theatrical tactics, such as a mass demonstration in which over 50,000 people unsuccessfully attempted to levitate The Pentagon using psychic energy. Hoffman was also successful at turning many “flower children” into political activists.

One of Hoffman’s protests was on August 24, 1967; when he led a group opposed to capitalism (and other things, including the Vietnam War) in the gallery of the New York Stock Exchange (NYSE). The protestors threw fistfuls of (mostly fake) dollar bills down to the traders below, some of whom booed, while others began to scramble frantically to grab the money as fast as they could. Hoffman claimed to be pointing out that, metaphorically, that’s what NYSE traders “were already doing”. The NYSE then installed barriers in the gallery, to prevent this kind of protest from interfering with trading again.

Hoffman was arrested for conspiracy and inciting to riot as a result of his role in protests that led to violent confrontations with police during the 1968 Democratic National Convention in Chicago, Illinois. He was among the group that came to be known as the Chicago Seven (Formerly known as the Chicago Eight), which also included fellow Yippie Jerry Rubin, Black Panther Party co-founder Bobby Seale, David Dellinger, Rennie Davis, John Froines, Lee Weiner and future California state senator Tom Hayden. Bobby Seale’s trial was severed from the others, who then became the Chicago Seven. Presided over by Judge Julius Hoffman (no relation to Abbie, which Abbie joked about throughout the trial), Abbie Hoffman’s courtroom antics frequently grabbed the headlines; one day, defendants Hoffman and Rubin appeared in court dressed in judicial robes, while on another day, Hoffman was sworn in as a witness with his hand giving the finger. At sentencing (the convictions were ultimately overturned), Hoffman suggested the judge try LSD and offered to set him up with “a dealer he knew in Florida.”

At Woodstock in 1969, Hoffman interrupted The Who’s performance to attempt a protest speech against the jailing of John Sinclair of the White Panther Party. He grabbed a microphone and yelled, “I think this is a pile of shit! While John Sinclair rots in prison …”. The Who’s guitarist, Pete Townshend, unhappy with the interruption, cut Hoffman off mid-sentence, snarling, “Fuck off! Fuck off my fucking stage!” He then struck Hoffman with his guitar, sending him tumbling offstage. Townshend later said he actually agreed with Hoffman on Sinclair’s imprisonment, though he made the point that he would have knocked him offstage regardless of his message.

According to Hoffman, in his autobiography, the incident played out like this, “If you ever heard about me in connection with the festival it was not for playing Florence Nightingale to the flower children. What you heard was the following: ‘Oh, him, yeah, didn’t he grab the microphone, try to make a speech when Peter Townshend cracked him over the head with his guitar?’ I’ve seen countless references to the incident, even a mammoth mural of the scene. What I’ve failed to find was a single photo of the incident. Why? Because it didn’t really happen.

“I grabbed the microphone all right and made a little speech about John Sinclair, who had just been sentenced to ten years in the Michigan State Penitentiary for giving two joints of grass to two undercover cops, and how we should take the strength we had at Woodstock home to free our brothers and sisters in jail. Something like that. Townshend, who had been tuning up, turned around and bumped into me. A nonincident really. Hundreds of photos and miles of film exist depicting the events on that stage, but none of this much-talked about scene.”

However, on Disc 2 of The Who: 30 Years of Maximum R&B, this incident is recorded on a track called “The Abbie Hoffman Incident.”

In 1970, Hoffman published Steal This Book, which advised the readers on how to basically live for free. Unfortunately many of his readers followed Hoffman’s advice and stole the book, leading many bookstores to refuse to carry it.

Hoffman was arrested in 1973 on drug charges for intent to sell and distribute cocaine. He always proclaimed that undercover police agents had entrapped him into a drug deal and planted suitcases of cocaine in his office. Hoffman subsequently skipped bail and hid from authorities for several years. Despite being “in hiding”, during part of this period, under the name “Barry Freed”, he successfully helped coordinate an environmental campaign to preserve the St. Lawrence River (Save the River organization). In 1980, he surrendered to authorities and received a one year sentence. On September 4, 1980, he appeared on 20/20 in an interview with Barbara Walters. Hoffman continued to be an influential radical journalist, contributing to the radical Ramparts Magazine.

In November 1986 Hoffman was arrested along with eleven others, including Amy Carter, the daughter of former President Jimmy Carter, for trespassing at the University of Massachusetts at Amherst. The charges stemmed from a protest against the Central Intelligence Agency’s recruitment on the UMass campus. Since the university’s policy limited campus recruitment to law-abiding organizations, Hoffman asserted in his defense the CIA’s lawbreaking activities. The federal district court judge permitted expert witnesses, from a former Attorney General to a former CIA agent, who testified about the CIA’s illegal Contra war against the Sandinista regime in Nicaragua in violation of the Boland Amendment.

In three days of testimony, more than a dozen defense witnesses, including Daniel Ellsberg, Ramsey Clark and former Contra leader Edgar Chamorro, described the CIA’s role in more than two decades of dirty tricks, broken promises, illegal and often violent activities. In his moving closing argument, Hoffman, acting as his own attorney, placed his actions within the best tradition of American civil disobedience. He quoted from Thomas Paine, “the most outspoken and farsighted of the leaders of the American Revolution”: “Every age and generation must be as free to act for itself, in all cases, as the ages and generations which preceded it. Man has no property in man, neither has any generation a property in the generations which are to follow.”

As Hoffman concluded: “Thomas Paine was talking about this spring day in this courtroom. A verdict of not guilty will say, ‘When our country is right, keep it right; but when it is wrong, right those wrongs.’” On April 15, 1987, convinced that the CIA had broken international law and committed higher crimes, the jury found Hoffman and the other defendants not guilty.

After effectively defeating the CIA in a public courtroom, Hoffman prepared for a cameo appearance in Oliver Stone’s anti-Vietnam War movie, “Born on the Fourth of July.” He essentially played himself in the movie, waving a flag on the ramparts of an administration building during a campus protest that was being teargassed and crushed by state troopers.

The movie was released on December 20, 1989, more than eight months after Hoffman’s purported suicide on April 12, 1989. For a man who had soaked up the media spotlight, it was rather uncharacteristic of Hoffman to not be around for his own opening. At the time of his death, Hoffman was at the height of a renewed public visibility, one of the few 60’s radicals who still commanded the attention of all kinds of mass media. He regularly lectured audiences about the CIA’s covert activities, including assassinations disguised as suicides. His Playboy Magazine article (October, 1988) outlining the connections that constitute the “October Surprise” brought that alleged conspiracy to the attention of a wide-ranging American readership for the first time.

A week after Hoffman’s death, a thousand friends and relatives gathered for a memorial in Worcester, Massachusetts at the temple he had attended as a child. Two of his colleagues from the Chicago Seven conspiracy trial were there, including David Dellinger and Jerry Rubin, Hoffman’s co-founder of the Yippies, by then a businessman and entrepreneur.

As the New York Times reported: “Indeed, most of the mourners who attended the formal memorial at Temple Emanuel here were more yuppie than yippie and there were more rep ties than ripped jeans among the crowd. . .

“Bill Walton, the radical Celtic of basketball renown, told of a puckish Abbie, then underground evading a cocaine charge in the 70’s, leaping from the shadows on a New York street to give him an impromptu basketball lesson after a loss to the Knicks. Abbie was not a fugitive from justice, said Mr. Walton. Justice was a fugitive from him.”

“On a more traditional note, Rabbi Norman Mendell said in his eulogy that Mr. Hoffman’s long history of protest, antic though much of it had been, was in the Jewish prophetic tradition, which is to comfort the afflicted and afflict the comfortable.”

Hoffman was only 52 at the time of his death, which was caused by somehow swallowing 150 Phenobarbital pills. He was said to have been upset about his elderly mother (Florence)’s cancer diagnosis, and to have suffered from bipolar disorder (Jezer, 1993) or a manic-depressive illness. His death was officially ruled a suicide, but many who knew him refused to believe that he had willingly taken his own life, particularly when he was so concerned about his mother’s health and well-being.

As reported by the New York Times, “Among the more vocal doubters at the service today was Mr. Dillinger, who said, “I don’t believe for one moment the suicide thing.” He said he had been in fairly frequent touch with Mr. Hoffman, who had “numerous plans for the future.”

Hoffman’s body had been found in his apartment in a converted turkey coop near New Hope, Pennsylvania. At the time of his death, he was surrounded by about 200 pages of his own handwritten notes, many about his own moods, yet there was no suicide note.

Hoffman died only three days before he was scheduled to celebrate the two year anniversary of his courtroom victory over the CIA, and less than three months into the presidency of George H.W. Bush, the former CIA director he had eluded in the mid-1970’s.

His life was dramatized in the 2000 film Steal This Movie, in which he was portrayed by Vincent D’Onofrio.

He was portrayed (by Richard D’Alessandro) in the anti-war protest rally scene at the Washington Monument in the 1994 movie Forrest Gump.