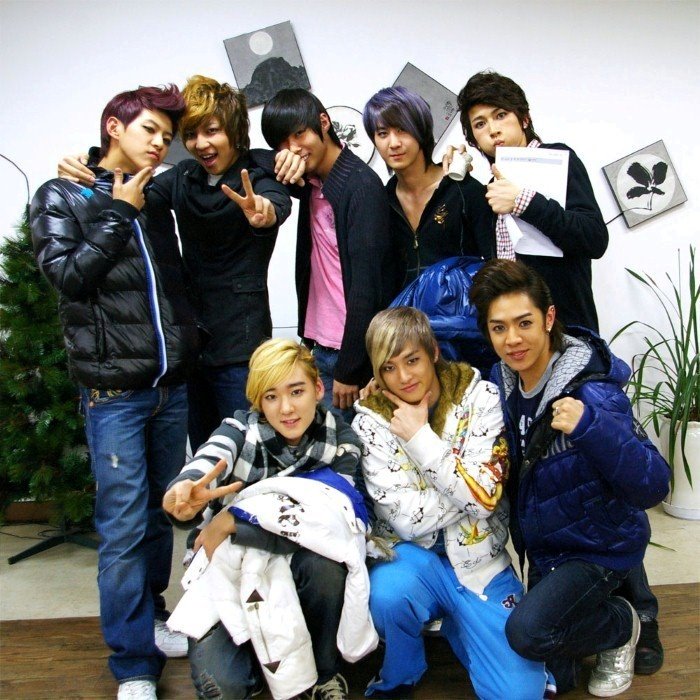 U-KISS (Korean: 유키스, Japanese: ユーキス) is a South Korean boy band formed by NH Media in 2008. Their name is an acronym, standing for Ubiquitous Korean International idol Super Star. The group consists of Soohyun, Eli, Kiseop, Kevin, Hoon, AJ and Jun . Their breakthrough hit was Man Man Ha Ni (2009) from their EP ContiUKiss. U-KISS is known for their international popularity, especially in Latin America where they have conducted various tours. They released their first full-length album Only One on February 3, 2010. In September 2011, U-Kiss released their second full-length album, Neverland. They made their formal debut in Japan in 2011 with the release of the single "Tick Tack". The second single is entitled "Forbidden Love" while their first Japanese full-length album was A Shared Dream (2012). Since their debut, the group has released three full-length albums, seven extended plays and various singles. The group also participated in various TV reality shows and films.

2008: Pre-debut and Debut:
U-KISS was first formed as a six member boy-group in 2008. Kim Kibum and Kevin Woo were members of the boy band Xing but left the group in early 2007. The other four members were all individually selected by NH Media through auditions. U-KISS debuted in Japan on August 15, 2008 at the Power of Atamix 08. The group debuted in South Korea on August 28, 2008 with a release of their first mini album, New Generation, (N-Generation) on September 3, 2008 and a live performance of their first song Not Young on Mnet. Even though they are new comer in the industry, U-KISS was considered for Japan-Korea collaborative project. A popular entertainment company, Yoshimoto Group in Japan, invested 150 billion KRW to groom U-KISS as an internationally known group. The reason behind this is their quality as a group with multilingual members: Alexander can converse in seven languages including Spanish, Portuguese, Cantonese, Japanese, Mandarin, Korean and English; Eli is fluent in English, Korean and Mandarin; the maknae Dongho can talk in Korean and Mandarin; Kevin in Korean and English while Kibum can speak Korean and Japanese.

2009-10: Only One, variety shows and first major concert:
U-KISS released their second mini-album Bring It Back 2 Old School on 2009 with its title song, I Like You which made them popular in Thailand. The third mini-album titled ContiUkiss launched Lee Kiseop as the seventh member of the group. The title track "Man Man Ha Ni" was released following a change in their line-up. The fourth mini album Break Time was released on 2010, along with their title track "Shut Up!. The group's first full-length album, Only One, was released on February 3, 2010 spawning their highest chart-topping single in the Philippines, Bingeul Bingeul. The album also topped Hanteo Charts, Hot Tracks, Syn-nara Records and Evan Records in just one day. U-KISS then played in Malaysia, Mongolia and Japan to promote the album. U-KISS promoted the album in the Philippines through series of mall show, wherein they sold more than 1,000 copies in one day which breaks the record of the highest sales in a launch, earning them a million pesos. Due to the said success, the group had their first major concert in the Philippines dubbed as U-KISS First Kiss Tour in Manila. Aside from their music career, U-KISS also starred in their own variety shows, All About U-KISS , ''UKISS Vampire'' and ''Chef Kiss'' while the members also appeared on other shows. Kevin Woo and Alexander Lee Eusebio joined Arirang's radio show Pops in Seoul hosting the 'All About You' segment and were also featured on Brave Brother's song, Finally.Kim Eli also became an emcee of MBC's show, Fusion. The new member Lee Kiseop appeared in a variety show known as Uljjang Shidae 2 (Pretty Boys and Girls Season 2) . Shin Dongho also made many appearances on shows, The Invincible Baseball Team, Idol Maknae Rebellion and My Black Mini Dress.Kibum along with Eli, also starred in the Thai drama Autumn's Destiny wherein their voices were dubbed due to the fact that they cannot speak Thai.

A US album was cancelled due to member termination of contract. Alexander and KIbum left the band in 2011, and were replaced by former "Paran" member Kim Jae Seop ( AJ) and a former solo artist, Yeo Hoon Min(Hoon). The new U-KISS released their fifth mini-album, Bran New Kiss, and a new ballad song, "0330". U-KISS released their second full-length album, Neverland, in September with their singles "Neverland" and "Someday". A DVD, U-KISS Days in Japan, debuted at No. 8 on the Daily Oricon Chart published in March 30, 2012. A compilation album called First Kiss placed second on Oricon daily charts on the day of its release. They also released the Japanese version of Bran New Kiss on August 24, 2011. The group released their first Japanese album, Tick Tack, and their second Japanese album, Forbidden Love, simultaneously with their first Japanese full-length album, A Shared Dream. The album peaked at No.6 and No.2 respectively.
In 2012 they participated in the Music Bank concert held in Paris, France. The group became the first K-Pop group to perform in Colombia in line with the celebration of 2012's Los 40 Principales along with international star Shakira.
The group had their sold-out concert tour dubbed U-KISS 1st Japan Live Tour 2012 in March that was held in Zepp Hall all over Japan. The tour lasted from March 2, 2012, to March 25, 2012. In the second week of June, two additional shows were sold-out.
In 2012, U-KISS has been chosen as Number 1 Hallyu group to watch out in Japan, while Kevin was chosen as Luckiest Hallyu Star of 2012.
They released their 6th mini-album in South Korea, DoraDora on April 25, 2012. On May 2012, DoraDora gained first spot on Germany's German Asian Music Chart. The group also releases their 7th mini-album or the special album, The Special to Kissme on June 5. The second single "Te Amo" was released on June 1, 2012 on various music sites that immediately placed No.4 on 'Soribada'. The group released their third Japanese single, "Dear My Friend" on July 5, 2012. It was used as a theme song for a Japanese anime, Stormy Night (Secret Friends).
Aside from album releases, the group is also set to perform along with Girls Generation and Shinee at the K-POP Nation Concert in Macao 2012. Member Kim Jaeseop (AJ) was admitted at Columbia University of United States in 2011. It was made announced on July 29, 2012 in their Japanese Live Tour that AJ will be in hiatus for 5 months and will no longer attend activities of U-KISS starting August to concentrate on his studies. According to NH Media, AJ will return in early 2013, meanwhile, U-KISS comeback in September will only feature 6 members. Before AJ's temporary departure from the group, the group attended the A-Nation opening ceremony at the Tokyo National Stadium. On August 9, 2012 they are expected to represent Korea in the Asia Progress M, part of the A-Nation's activities, the biggest music festival in Japan. The group also performed on August 26, 2012 with Hamasaki Ayumi, M-Flo and Big Bang at the Ajinomoto Stadium.
U-KISS had the last leg of their Japan Tour in Budokan wherein they garnered 10,000 audience, their biggest to date. Meanwhile, the group released their fourth Japanese single, One of You on September 5, 2012. On its first week, it peak to No. 1 at the weekly chart of Tower Records. On September 20, the group released their 7th mini album "Stop Girl" and planned to actively promote it in 10 countries including Thailand, Philippines, United States and China.
U-KISS received a special achievement award in recognition for their contribution to the Hallyu Wave. The group attended Arirang TV's celebration event for their milestone of reaching over 100 Million clients. At the event, U-KISS was awarded the "Special Hallyu Achievement Award" from the minister of the Ministry of Culture, Sports, and Tourism.
U-KISS released their fifth Japanese single, "Distance" on December 12, 2012.

2013-present: fourth visit to Manila, Collage and the first sub-unit "uBEAT", U.S. Tour:
U-KISS participated in the Dream KPOP Fantasy Concert in Manila, Philippines on January 19, 2013. AJ, who was previously on hiatus, returned to U-KISS on February 16 to attend their Valentine's Day event. U-KISS will also release their first remix album on March 27, 2013.Alone was released on February 13, 2013, and was used as the theme song for Japanese broadcasting channel NHK's drama Bookstore Worker Michiru's Personal Story. U-KISS released their third full-length album, Collage, featuring AJ, on March 7, while the lead single "Standing Still", composed by Ryan Jhun, was released on March 6. It features Kevin solo song, "My Reason" and Eli-AJ composed duet "Party All the Time" and Soohyun-Hoon's "More Painful than Pain". The lead single "Standing Still" was first performed in Show Champion on March 6, a day before its release date. The group also performed at the "Formula 1" event held at the Petronas Tower in Malaysia on March 22, 2013, wherein KPOP group 2NE1 and American artists Backstreet Boys and Demi Lovato shared the same stage with U-KISS. The group stated during the press conference, "...while we went on foreign performances, we were on stages with famous stars, but this performance feels different ... this will be so much more meaningful because we can stand on the same place as Backstreet Boys, who we really respect. We're so honored that U-KISS was invited to a place where people all over the world gather, and we'll put on a great performance as the Korean representatives."
Along with the album release, U-KISS will also embark on a Zepp Tour, dubbed as "U-KISS Zepp Tour 2013", during the summer. The expected tour attendance was to be exceeding past 60,000 people. Soohyun and Kevin were also announced to be a part of the musical adaptation of Summer Snow, along with Super Junior's Sungmin. U-KISS also released a dating simulation mobile game, "U-KISS 365" in Japan, published by Mobage.
On April 8, NH Media confirmed "U-KISS' first sub-unit 'uBEAT' will debut at the end of April." The sub-unit is composed of members Eli and AJ with Kevin featuring on the title track as the main vocalist. The sub-unit is also said to have its title track produced by the Brave Brothers, who previously produced their hit "Man Man Ha Ni" and uBEAT is set to release a mini album with 2 or 3 new songs.
Avex Trax announced that U-KISS were to release their second full-length Japanese album, "Inside Of Me", on July 24, 2013. The group would promote the album through their national tour. The group also are all featured on their own "U-KISS Visa Card", making them the first Korean artists to appear on a Visa card for one of the three major banks, Sumitomo Mitsui, in Japan. Fans who use the "U-KISS Visa Card" will get points towards exclusive U-KISS items. U-KISS will also attend A-Nation 2013 as part of the Asia "Progress".
On October 16, 2013, it was announced that member Dongho will be leaving the group due to health and personal issues. A U.S. tour was announced in December, and will make stops in San Francisco, Los Angeles and New York in January. The group also released a hybrid clothes album allowing fans to scan t-shirts made exclusively by the members to get access U-KISS album "Only You". They met relative success with their tour as they ended up on media outlets such as "Fuse", "Good Morning America" and the "New York Post". At the New York concert U-KISS announced that fans should look forward to a ballad sub-unit soon. Currently U-KISS is gearing up for promotions of their 8th Japanese Single "Break Up" as 5 members due to AJ returning to study at Columbia University.
On May 15, 2014, NH Media announced, via U-KISS' official Korean website, new member Jun to the public. "The new member 준 is born in the year of 1997 and will be joining U-KISS in future activities. The English spelling of his name is JUN and he is positioned as a vocalist and rapper. Please give him your warm support as he will join the existing members to work hard to form a new U-KISS together." Also cited is the extension of rapper/composer AJ's hiatus, as he continues his studies at Columbia University in New York. 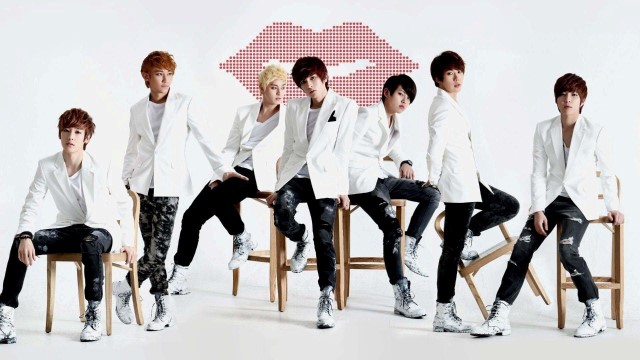 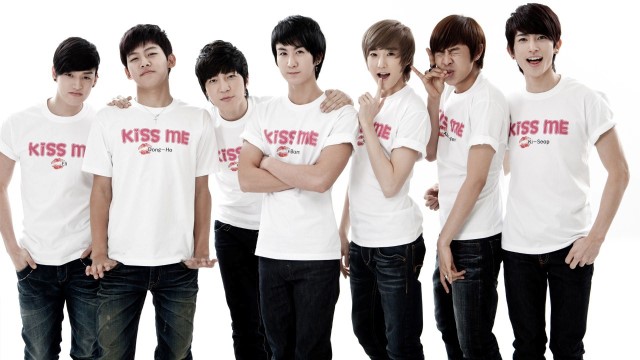 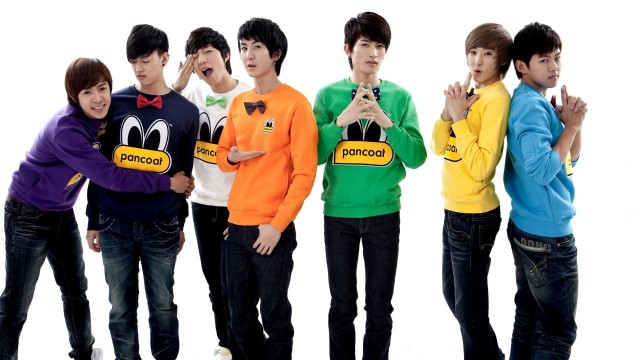