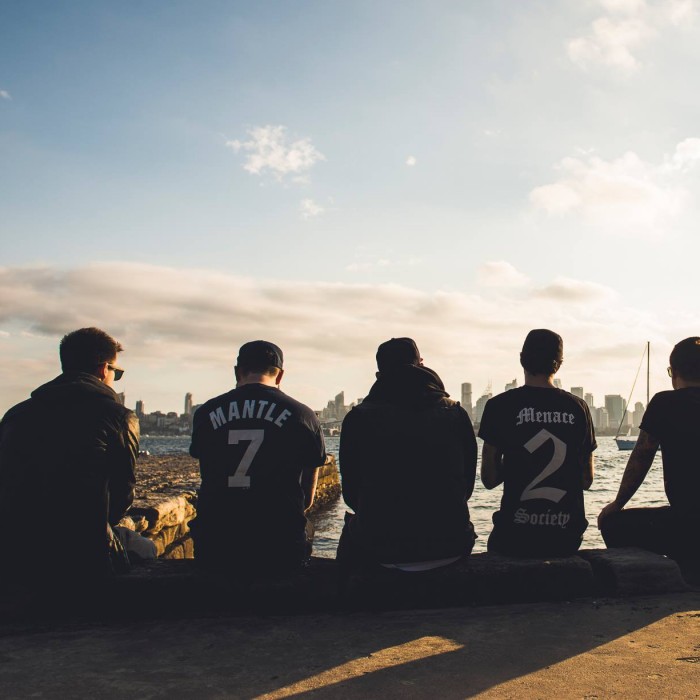 For Hand Of Mercy, it's been somewhat of a long road to success - at least by the standards of todays Internet hype-driven music industry. Starting out in 2007, the band has taken the long road - touring their arses off, and releasing music and perfecting their art.

But for all intents and purposes, the formula for this band has worked. Have fun, play shows and make friends. With a 100% percent DIY approach to everything they do, the band has been able to tour with some of the best bands from Australia and the rest of the world. To date, their tour resume reads like a who's who of Modern Hardcore heavyweights - The Amity Affliction, A Day To Remember, The Ghost Inside, August Burns Red and most recently, a national main support on Parkway Drive's "Sick Summer II" Tour in January 2012.

The band has released two EPs (Trash The Party, 2007 and Scum of The Earth, 2008) and one album (The Fallout, 2010), self-funding everything including recording, film clips and everything in between. The music has fallen into the hands of the right fans, and the band was able to draw large crowds of enthusiastic punk and hardcore kids, from all walks of life.

But when it came time to release their follow up album, the band decided it was time to step things up. They enlisted American Knob-Twiddler Shane Frisby to make the record sound world class, being inspired by his previous work with The Ghost Inside and Bury Your Dead. Still financing things themselves, the band flew to Boston to record, an experience that left them inspired to do everything they could to have their band heard by as many people as possible.

“Recording Last Lights was the greatest things Hand Of Mercy have done to date." Guitarist Adam McLean elaborates. Not only did we get to produce a record that gets us stoked every time we stick in our head phones and blast it, but as a band it has allowed us to become more committed and focused on what lies ahead for the future. This is by far the heaviest album we have created and something we can see people throwing up their horns and banging their fucking head to.”

Returning armed with a new record, the band went straight out on tour with their friends in Parkway Drive - spending over a month playing in front of thousands of fans every night and further strengthening their resolve to take that step up on this next album.

It wasn't long before this attitude grabbed the attention of the staff at UNFD, who had been friends and fans of the band for quite some time. Signing on to release the record, the band and label's commitment to getting Hand Of Mercy out to the greater public made it to the perfect union.

Mclean again enthuses, “We are beyond stoked to be releasing the album through UNFD! We have so many great friends already on the label and personally own so many of the labels releases. It is the perfect fit for us and we can’t wait for what the future holds working alongside the team at UNFD.”

Already, fans have caught a glimpse of the new material with the single "Rumble In The Grundle", but with the release of the music video (filmed on the Parkway tour) for "Absence Makes The Heart Go Wander", Hand Of Mercy have shown what the new album is all about. It's well written, strong-minded hardcore with both traditional and modern hardcore music made with incredible live shows in mind. The song shows off the hard work the band has dedicated to their craft in 3 minutes of hardcore adrenaline, and represents exactly what Last Lights is all about. It's a testament to the fact that Hardcore is best represented by bands who work hard on their own terms, and do everything they do for exactly the right reasons.

And there's no question, Hand Of Mercy have earned every bit of success that's about to come their way.