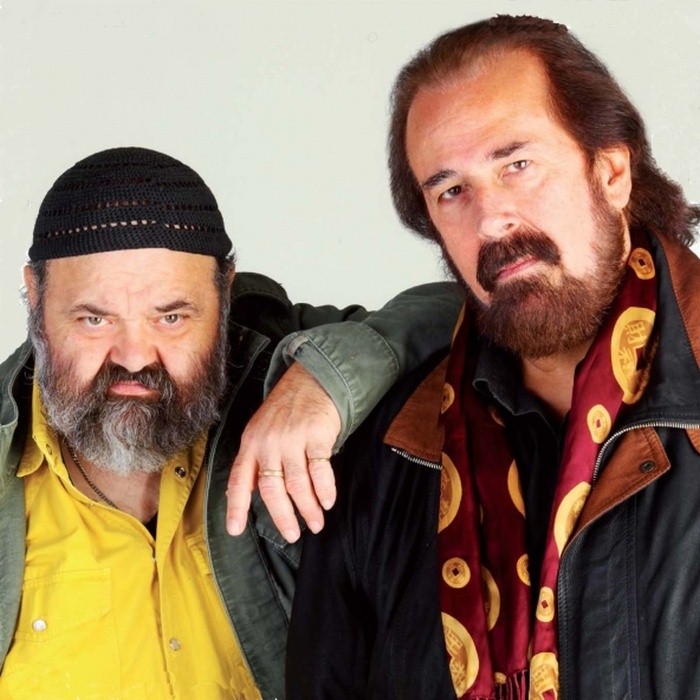 The Banco del Mutuo Soccorso, or simply Banco, is a progressive rock band of Rome founded in 1969, in business. Together with the Premiata Forneria Marconi, the Area and the Orme is the most representative example and well known, also abroad, of Italian progressive rock.
The history of the "Banco" began in the last months of 1968, when the seventeen-year-old keyboardist Vittorio Nocenzi managed to get an audition at the important RCA label, thanks to the signal from Gabriella Ferri, for which he had already recorded some pieces. The record companies, in those years, were unwilling to promote solo instrumentalists, and the legend tells that Nocenzi had vaunted the existence of an unspecified group led by him. He found himself, therefore, in the position of having to hurry up a musical formation to present himself at the audition. For this purpose he recruited relatives and friends able to "hold up an instrument" and invented the name of Banco del Mutuo Soccorso, perhaps inspired by some credit institute or insurance company in the area.
The group met in the private rehearsal room, in Marino, in the Castelli Romani, later becoming famous with the name of "stable", such being in reality: a real stable restructured and equipped perfectly (says the same Vittorio Nocenzi in a interview) "with the mangers full of amplifiers, distortions and musical instruments instead of the hay for the cows".
The first line-up was composed, in addition to Vittorio Nocenzi and his brother Gianni on piano, by Gianfranco Coletta (member of Chetro & Co. and, later, of Alunni del Sole) on guitar, Fabrizio Falco on bass and Mario Achilli on drums, these last members of the Crash, a psychedelic rock group founded by the Falco brothers, with whom Vittorio had been collaborating for several months. The audition obtained the placet of the examiners and the newborn "Banco del Mutuo Soccorso" produced three pieces that were included in a compilation of new formations entitled "Sound '70" and published only on cassette tape. The pieces of this collection (I see the telephone, My freedom and Father Francesco) will be recorded, a few weeks after the audition, by an already retouched formation, with Claudio Falco on guitar and Franco Pontecorvi on drums.
The seventies
In 1971 the Banco del Mutuo Soccorso participated, with little luck, at the 2nd Pop Festival of Caracalla in Rome. Among the groups that took part in the festival there were The Experiences and the Wildflowers that had already published a single (Out of town / Two children in the courtyard with the record company Apollo ZA-50014). The time to socialize and, at the end of the event, the Banco del Mutuo Soccorso had assumed its definitive formation, incorporating Francesco Di Giacomo, Renato D'Angelo and Pierluigi Calderoni, respectively voice, bass and drums of the group Le Esperienze, in addition to Marcello Todaro, guitarist of the Fiori di Campo. It was a real qualitative turning point: the group passed from the beat songs of the early period, to progressive compositions, strongly influenced by the classical musical formation of the Nocenzi brothers and embellished by the refined texts written by Francesco Di Giacomo.
The group took part in the second edition of the "Festival of Avant-garde and New Trend Music" held in Rome at Villa Pamphili from 1 to 4 June 1972, ranking in first place on a par with the Circus 2000.
This training published in 1972 the debut album Banco del Mutuo Soccorso which, with pieces such as R.I.P. (Requiescant in pace), the long suite The Garden of the Magician and Metamorphosis, instrumental with a short but wonderful final vocal insert, immediately catalyzed the attention of the public of the nascent Italian progressive rock scene. The graphic design of the cover is also very particular: shaped like a terracotta piggy bank.
In the same year the second album was released, Darwin !, the first concept album created by the group: the songs are all linked to the central theme of Charles Darwin's theory on the evolution of species.
These two albums can be considered the most creative and original of the group, centered on the vertiginous and virtuous intertwining of the keyboards of the Nocenzi brothers and on the inimitable tenant registers of Di Giacomo, at the service of a very special contamination between the progressive English rock, the Mediterranean sounds and the tradition of Italian melodrama, which peeps in the most unexpected moments.
The first change in the formation of the group took place in 1973, when Todaro was replaced on guitar by Rodolfo Maltese, coming from the Homo Sapiens group. In I was born free (1973), according to several fans and critics the best album of the band, Maltese appeared formally as a guest, but in fact he was already a member of the Banco.
The eighties:
The first work of the Bank in the eighties was a live album (the first) entitled Capolinea, in which the group retraces the salient features of its history. Conceptually revealing his "first era", this album prepared the Bank for a change of course, in particular, the abandonment of certain patterns typical of the progressive rock of the seventies, in particular in relation to the structural complexity (and length in minutes ) of the pieces, in favor of relatively simpler and more direct passages. This trend is perfectly represented by the first two albums of the decade, Urgentissimo (1980) and Good News (1981). In this period the training was enriched by Karl Potter on percussion, a musician who had already collaborated with Pino Daniele and who contributed to give more incisiveness to the rhythm section of the Banco.

In 1983 comes out Banco where there is the song Moby Dick, which will become one of the most popular songs of the band, despite moving away from the canons of progressive rock that has characterized them in the past. The album is another turning point as it was the last to see the presence of Gianni Nocenzi, who left the group immediately after the summer promotion to embark on a solo career and collaborate with the Japanese company Akai, as an expert in samplings.

In 1985, Giovanni Colaiacomo left the group and was replaced by multi-instrumentalist Gabriel Amato, former member of Aretha Franklin's band. The album came out ... and via (1985) and a participation in the Sanremo Festival with the song "Grande Joe" . Afterwards the Bank chose the recording silence, breaking the contract with CBS, to devote himself exclusively to live concerts, interrupted only by the release of Do not put your fingers in the nose, the first solo album by Francesco Di Giacomo, which sees the artistic production by Vittorio Nocenzi and in which all the members of the last formation of the Banco participated as musicians.
In 1989 Donna Plautilla was published, a collection of unpublished pieces from the seventies.
The nineties:
Francesco Di Giacomo del Banco together with Sergio Endrigo and Vito Vita, bassist of Powerillusi. Loreto, August 1999, before an evening show at Recanati dedicated to Giacomo Leopardi
At the beginning of the nineties, following in effect what was the example of many "classic" progressive rock bands, Banco started a revival of its first period, returning to the full name Banco del Mutuo Soccorso and bringing in tour tracks from the seventies.
For the twentieth anniversary of the band, Nocenzi completely rewrites the first two albums, Banco del Mutuo Soccorso and Darwin! re-proposing them in a box (in the shape of a Moneybox), with totally new recordings and innovative arrangements, the first example in the history of Italian discography.
Halfway between stylistic revival and new sounds was the unpublished album Il 13 del 1994. Three historical members of the group, Vittorio Nocenzi, Francesco Di Giacomo and Rodolfo Maltese, along with the young Roman guitarist Filippo Marcheggiani, also embarked on the Acoustic project, in which several classical pieces were reinterpreted in unplugged key. In this period the Bank also undertook several world tours, reaching Japan, Mexico, the United States, Brazil and Panama. One of the most successful concerts (in Japan, May 25 and 26, 1997) was taken from the live album Nudo (which also included a new song of the same name in the studio).
The years 2000 and 2010:
A Nudo followed No stage (2003), a live album in celebration of the thirtieth anniversary of the band, seeing as guests artists including Morgan, Mauro Pagani, Federico Zampaglione (Tiromancino), Gianni Nocenzi, Eugenio Finardi, Filippo Gatti, Angelo Branduardi, for a series of very successful concerts.
On 21st February 2014, while the Sanremo Festival is underway, news of the death of singer Francesco Di Giacomo, caused by a road accident in Zagarolo , is reported. After a period of silence, the band announces the release of a work conceived and directed by Vittorio Nocenzi, entitled An idea that you can not stop, released on September 16th 2014 by Sony on double CD and triple vinyl: 18 live tracks and 50 minutes of unreleased, with the participation of various theater actors, an album that wants to pay homage to the historic singer and mark the new path for the band's future. Since 2015 the new voice John de Leo and guitarist Maurizio Solieri have been included in the group.
The night between 28 and 29 July of the same year, the leader and founding member Vittorio Nocenzi was struck by a cerebral hemorrhage and hospitalized at the nearby hospital of Vallo della Lucania.
On 3 October 2015, after a long illness, the historic guitarist of the group, Rodolfo Maltese, went out. 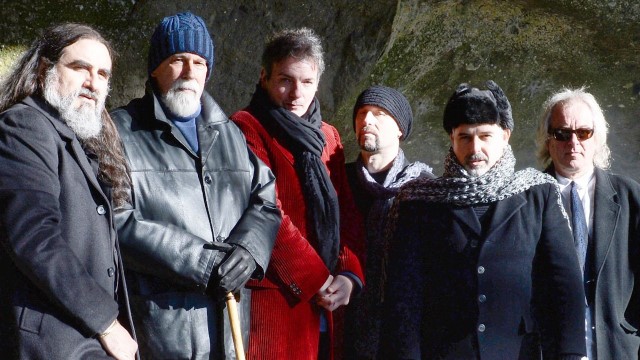 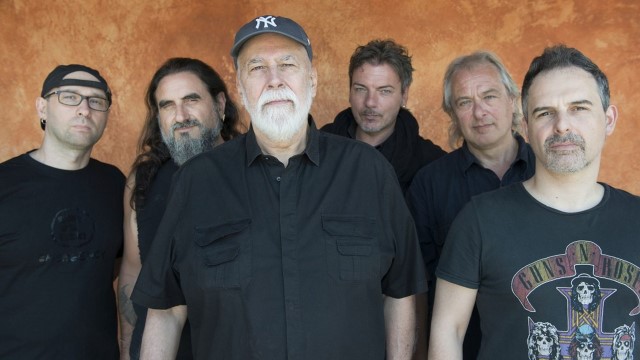 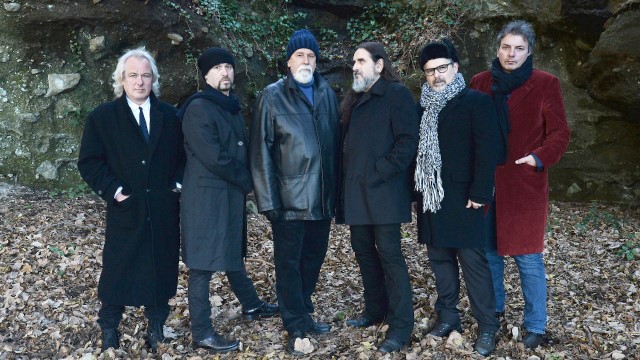 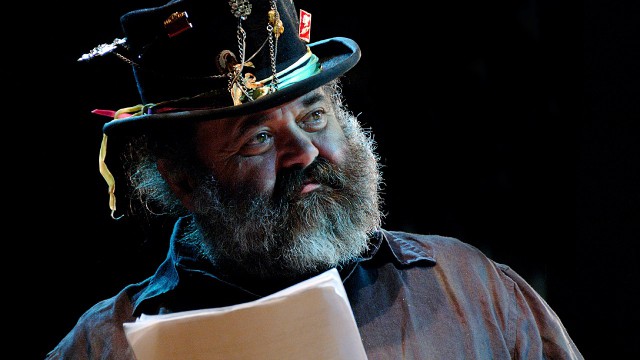