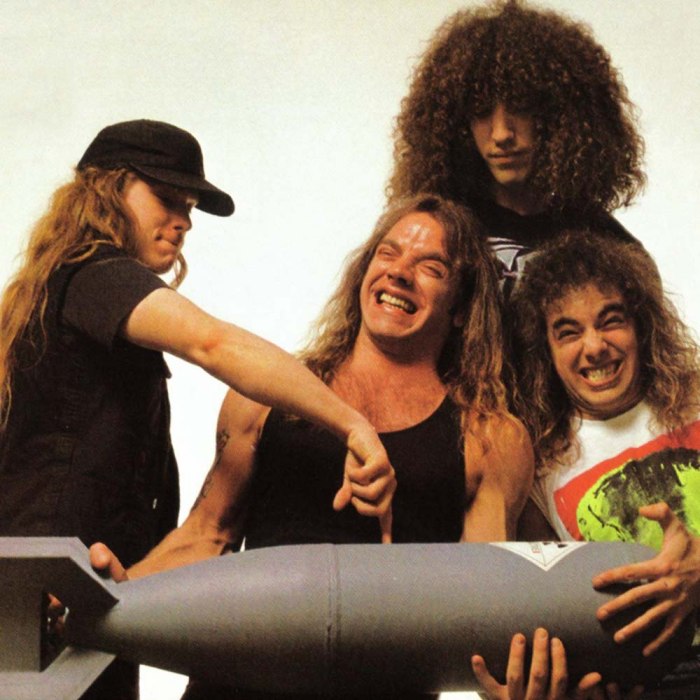 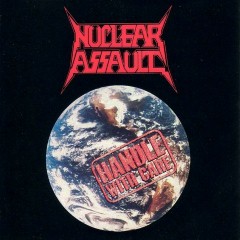 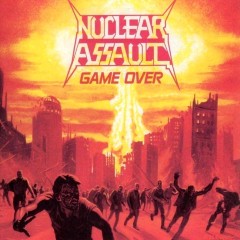 Nuclear Assault is an American thrash metal band formed in 1984.
After the release of Anthrax's debut album Fistful of Metal, bass player Danny Lilker, a founding member of the group, was fired by the band. He decided to pursue a more aggressive style of music and formed Nuclear Assault with guitarist/vocalist John Connelly, who had been involved in an early version of Anthrax. They were joined by guitarist Mike Bogush and drummer Scott Duboys (later of Cities, Cycle Sluts From Hell and Warrior Soul). They then recorded the first of two demos, which included the songs Stranded in Hell, The Plague, and Hang the Pope.
The group's first live performance was at the Union Jack in South River, New Jersey in late 1984. Guitarist Mike Bogush was later replaced by Anthony Bramante. Bramante's first live performance with the group was at L'Amour in Brooklyn, New York in April 1985. Shortly after the performance, Duboys left the band and was replaced by powerhouse drummer Glenn Evans formerly of New Jersey based band T.T. Quick.
The second demo "Live Suffer Die" was recorded and the band began touring the United States consistently. The band signed a multi-album contract with Combat Records and after recording the Game Over album in April 1986, the band secured a European tour with Agent Steel and Atomkraft. Later, feeling constrained by their contract with Combat, the band signed with I.R.S. Records and recorded Survive in 1988. The album reached number 145 on the US Billboard 200 chart and Nuclear Assault set off on a 180-day world tour in the United States and Europe; first as an opening for Slayer and later headlining with British group Acid Reign as a support act. The next album, 1989's Handle with Care, would see the band at their commercial peak, hitting the US chart at number 126, and peaking in the UK Albums Chart at No. 60, with more touring, including a trip to Japan and a U.S. tour opening for Testament and Savatage. The band released their first live album, Live at the Hammersmith Odeon, in 1990, but internal troubles were causing problems for the band.
Constant touring and recording was taking its toll on the band, and there was a rumor that the band might split. The recording of Out of Order was problematic. Lead songwriter John Connelly was conspicuously absent from the recording process. He only sang on five of the songs and played the guitar on one (Quocustodiat his only full writing credit), leaving Evans and Lilker to do most of the recording alone. After the release of Out of Order bassist Lilker left to start the band Brutal Truth in 1990. The band enlisted Scott Metaxas on bass and toured across the United States and Europe before longstanding guitarist Anthony Bramante left the band. In 1993, the band released one more album, entitled Something Wicked doing one last European tour with guitarist Dave DiPietro before breaking up in 1995.
Nuclear Assault later reunited for one concert in 1997 (put on by Eric Paone of 'Candy Striper Death Orgy' in New Hampshire) before parting ways a second time. Then, two more shows the following year with Eric Paone on bass guitar in New England. They reformed once again in 2002 to record a live album entitled Alive Again followed by several European tours, first with Testament and Death Angel, then with Exodus and Agent Steel. A new studio album entitled Third World Genocide followed in 2005, with yet more touring, including a South American tour with Death Angel.
They made a guest appearance at the Maryland Deathfest on May 25, 2008.
Nuclear Assault are still active and appeared at the Metal Merchants Festival in Oslo, Norway, in January 2011.
The Los Angeles thrash metal band Bonded by Blood released a cover of Nuclear Assault's "Critical Mass" which was available as an exclusive bonus track for the first 150 CD pre-orders of their third album, The Aftermath, released July 3, 2012. 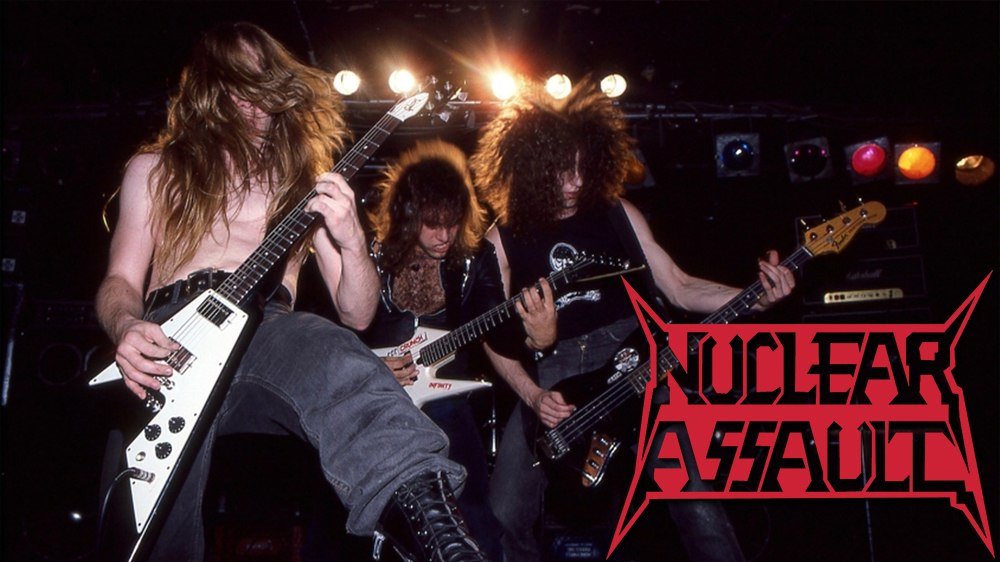 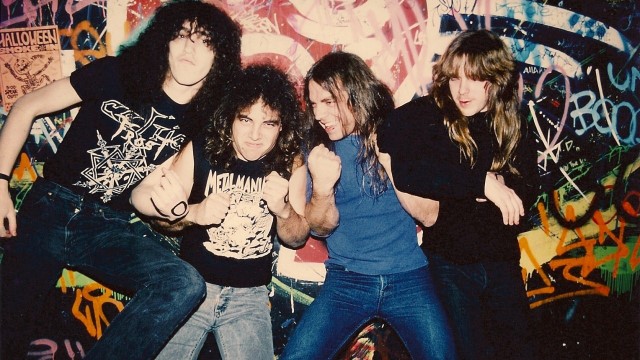 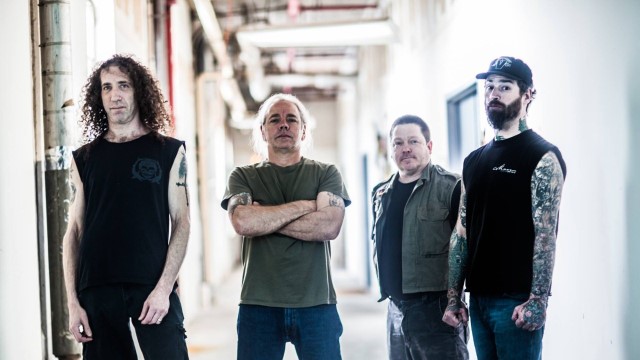 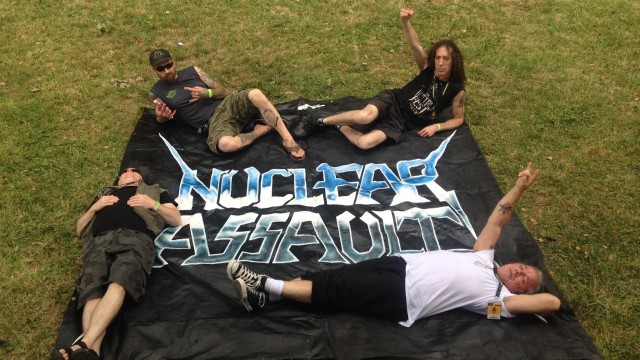 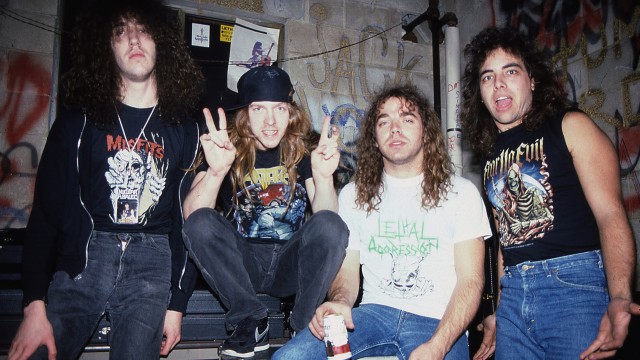