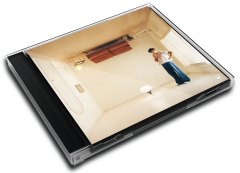 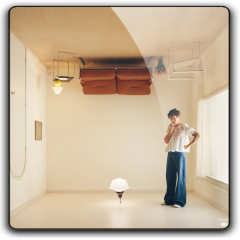 Harry's House is the third studio album by English singer and songwriter Harry Styles, released on 20 May 2022 by Columbia and Erskine Records. The album was preceded by the singles "As It Was" and "Late Night Talking".

Background and release
English singer and songwriter Harry Styles announced the title of his upcoming third studio album as Harry's House on 23 March 2022, unveiling its artwork, a 40-second trailer and the album's release date as 20 May 2022. In the trailer, Styles steps on the podium of a theatre and grins while a "house façade" rises near him and synthesisers play in the background. Harry's House features 13 tracks. Joni Mitchell, who included a track called "Harry's House / Centerpiece" on her 1975 album The Hissing of Summer Lawns, tweeted that she "love the title". Upon announcing the album, he set up an interactive website and a new Twitter account. The messages say "you are home" and "in this world, it's just us, you know it's not the same as it was". In an interview with Apple Music, Styles explained how he came up with the album title: "The album is named after Haruomi Hosono, he had an album in the '70s called Hosono's House , and I spent that chunk in Japan; I heard that record and I was like 'I love that. It'd be really fun to make a record called Harry's House'." The album features John Mayer on lead guitar on "Cinema" and "Daydreaming".

Promotion
"As It Was", was released as the lead single on 1 April 2022, after previously being announced on 28 March 2022. On 15 April 2022, during his Coachella headlining performance, Styles performed "As It Was" live for the first time, in addition to two then-unreleased songs from the album: "Boyfriends" and "Late Night Talking".

On review aggregator Metacritic, Harry's House received a score of 84 out of 100 based on 11 critics' reviews, indicating "universal acclaim". Alexis Petridis of The Guardian wrote that the album "ticks a lot of the right boxes and has abundant charm, which makes it a perfect reflection of the pop star who made it". Reviewing the album for DIY, Emma Swann felt that while Styles alternately spends time "exploring vivid lyrical micro-vignettes" and then "obfuscating" the narrative on the album, he is "also not scared of being secondary to the song; a lesson it's taken many others far longer to learn". Nicholas Hautman of Page Six called the album Styles' "biggest sonic shift yet", writing that the artist is "a 21st century rock god who doesn't need to cater to anyone".

User Album Review
“We’ll find a house and garden somewhere / Along a country road a piece,” Joni Mitchell sang on 1975’s ‘Harry’s House/Centerpiece’. “A little cottage on the outskirts / Where we can really find release.” The Laurel Canyon icon’s experimental song, mixing jazz and folk, might have referred to a piece of real estate, but for Harry Styles – whose third album takes its title from the Mitchell track – home is a figurative place.

The former One Direction star’s “little cottage on the outskirts” can’t be found on any map, but rather in his head. His new album, ‘Harry’s House’, is an exploration of his definition of home, something he started thinking about when the pandemic forced his typically on-the-go lifestyle to come to a screeching halt. Instead of finding release in a cute countryside residence, the record posits that feeling can come from a state of mind and the people you’re surrounded by.

“I’ve never been a fan of change / But I’d follow you to any place,” Styles sings on the gleaming, strutting ‘80s pop of ‘Late Night Talking’, which battles lead single ‘As It Was’ for brightest bop on the record. To prove his point, he offers up one glamorous suggestion and one that’s, well, decidedly un-glam: “If it’s Hollywood or Bishopsgate / I’m coming too.”

Wherever his digs are – LA, London, somewhere in between – ‘Harry’s House’ is full of the cosiness of home comforts. He sips on “a bottle of rouge” in the garden on ‘Grapejuice’, a song that sounds like The Beatles played through the aural equivalent of a vintage filter (and is the latest continuation of the Harry Styles Fruit Universe following ‘Watermelon Sugar’, ‘Cherry’ and ‘Kiwi’). On the beautiful, folky ‘Matilda’, he’s warmly welcoming, reassuring: “You’re just in time, make your tea and some toast”, while the sweet sing-song-y lists of ‘Keep Driving’ reel off picturesque scenarios of “maple syrup, coffee, pancakes for two / Hash brown, egg yolk – I will always love you”.

Styles has described this record as his “biggest and the most fun, but by far the most intimate”. He counterbalances those tales of domesticity and romance with songs that blast to the heart of old-school funk, disco and soul, but never strays into pastiche, homage or cheap retro knock-off territory. Album opener ‘Music For A Sushi Restaurant’ comes tearing into view with a diva-worthy wail from the star that quickly dissolves into a slinky bassline and, shortly after, a peacocking trumpet melody that feels both flashy and celebratory.

‘Daylight’ offers up clipped soul and R&B, staying restrained as its creator swoons loved-up lines like “If I was a bluebird, I would fly to you / You be the spoon / Dip you in honey so I could be sticking to you”. But when he stops singing, the rhythm section takes over, splashy drums filling the speakers alongside big, bouncy bass. ‘Cinema’ takes things into a nocturnal disco prowl, Styles sidling through shiny but shadowy layers as he sings of insecurity and lust (“I just think you’re cool / I dig your cinema / Do you think I’m cool too? / Or am I too into you?”).

‘Satellite’, meanwhile, ventures into outer-space. Sci-fi bleeps drift across electronic drones and a gentle “ooh oh ooh oh ooh” chant, making it feel as if you’re floating through the milky way with the singer as he narrates: “Spinning out waiting for you to pull me in / I can see you lonely down there / Don’t you know that I am right here?” It’s musically one of the most interesting songs Styles has made so far, swirling into a galactic storm in its final throes.

‘Harry’s House’ is undoubtedly Styles’ best record yet and presents a musician comfortable and confident in what he wants to create right now. That gives the album a sense of warmth that makes the songs on it feel conversational and close, as if you’re sitting around your own house catching up with the star. Mostly, that plays out to brilliant effect, as on the finger-picked guitar, relationship examination of ‘Boyfriends’, but occasionally does throw up some lyrics that make you do a full-body wince. “Somehow you’ve become some paranoia / A wet dream just dangling,” he muses on the starlit folk of ‘Little Freak’, while ‘Cinema’ boasts the line: “You pop when we get intimate.”

A few bleurgh-inducing moments aside, the musician’s third album feels like a magical thing – a record that you want to take up residence in until you know its every nook and cranny in minute detail. Home, for Styles, might be a state of mind, but with ‘Harry’s House’, he’s made an album that feels like the “little cottage” Mitchell once sang of; a place where you “can really find release”, relax and process the minutiae of your day.