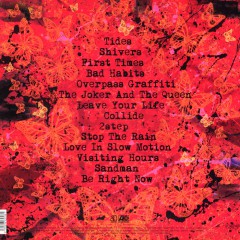 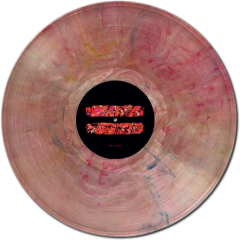 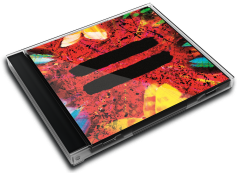 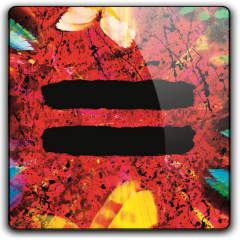 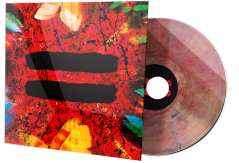 = (pronounced and subtitled "equals") is the fifth studio album by English singer-songwriter Ed Sheeran, released on 29 October 2021 by Asylum and Atlantic Records. The album was supported by the singles "Bad Habits", "Shivers" and "Overpass Graffiti", in addition to "Visiting Hours", released as the sole promotional single. It received mixed reviews from music critics. The album reached number one in Australia, Belgium, Canada, Denmark, France, Germany, Ireland, Italy, Lithuania, the Netherlands, New Zealand, Scotland, Sweden, the United Kingdom, and the United States.

Background
On 18 August 2021, Sheeran said there would be a "big announcement" the following day. On 19 August, he announced the album and its release date of 29 October on his social media accounts. He described the album as his "coming-of-age" record. To him, the album was a "really personal record and one that means a lot to me", citing changes in his life, including marriage, the birth of his daughter and experienced losses. The promotional single "Visiting Hours" was released alongside the announcement.

In an interview with Capital FM on 27 June 2021, Sheeran also stated that he would like to see the songs he made for the film Yesterday appear on a repackaged version of the album before he goes on tour for the record.

User Album Review
It’s quite an accomplishment to sing about playing to 80,000 at Wembley Stadium, as Ed Sheeran does on folky new ballad ‘First Times’, and retain a veneer of everyman relatability. Still, that’s a balance he managed to pull off on three previous mega-selling albums and 2019’s ‘No.6 Collaborations Project’, which teamed him with fellow superstars including Justin Bieber, Stormzy and Cardi B. The Suffolk-bred pop alchemist does it again here, though not without a few awkwardly mawkish moments.

The album it’s easier to call ‘Equals’ has already been trailed by two hugely successful upbeat singles: ‘Bad Habits’, a naggingly catchy mix of Bronski Beat and The Weeknd, and ‘Shivers’, a slinky bop in the vein of Sheeran’s most-streamed song, ‘Shape of You’. Together they gave him 15 straight weeks at the top of the UK charts, a reign Sheeran was so content with that he encouraged fans to stream Elton John‘s ‘Cold Heart’ earlier this month so that his mentor could score his “first Number One in almost 20 years”. It was a generous move that also felt like a flex: when you’ve spent 15 weeks at number one, you can afford to help out an old friend.

At this stage in Sheeran’s globe-conquering career, it’s surely no spoiler to point out that ‘=’ contains more surefire hits. Opening song ‘Tides’ is just the sort of intimate yet anthemic pop-rock stomper that will get another 80,000 singing along at Wembley. ‘2step’ offers an infectious mix of slick rhythms and crisp acoustic guitars. Best of all is ‘Overpass Graffiti’, an unstoppable bop that sounds a bit like Don Henley‘s ‘Boys of Summer’ crossed with The Cure‘s ‘Just Like Heaven’. It’s a contemporary take on ’80s pop sounds every ounce as effective as ‘Bad Habits’.

No one looks to Sheeran for fearless sonic experimentation, but there are some fun and unexpected production choices here – ‘Collide’ is underpinned by a propulsive drum’n’bass beat, while the clubby throb of ‘Be Right Now’ ends the album on a heady high. In its own way, the lovely, country-flecked ballad ‘Visiting Hours’, which Sheeran wrote about his late friend Michael Gudinski, is equally unexpected. It’s surely the first song to feature backing vocals from both Kylie Minogue and comedian Jimmy Carr. Then again, who says down-to-earth superstars can’t enjoy an episode or two of 8 Out of 10 Cats?

Many of the ballads also sound like potential hits – especially ‘The Joker & The Queen’, which could become this album’s ‘Perfect’, his smoochy 2017 smash that’s racked up more than two billion YouTube views to date – but they’re less easy to love if you don’t have a sweet tooth. Yes, Sheeran is capable of capturing a tender moment in a poignant and affecting way: “We drank your father’s whisky when your Grandma died / You brought me to the morning through my darkest night,” he sings on ‘Collide’.

But he’s also prone to laying it on a bit thick – when he sings “I need to tell you you’re beautiful ’cause it’s been a while” on the cloying ‘Love in Slow Motion’, it’s an uncomfortable reminder of ‘Little Things’, the somewhat patronising song he wrote for One Direction (“You’ve never loved your stomach or your thighs,” the boys promise a love interest on that song, “But I’ll love them endlessly”).

The album reaches its nadir on ‘Sandman’, a plinky-plonky lullaby, written for his baby daughter Lyra, on which Sheeran waffles on about “marshmallow books and strawberries”. Maybe he was inspired by Madonna’s sweetly psychedelic children’s song, ‘Dear Jessie’, but the end result sounds more like a confused Jack Johnson. Then again, it’s an undeniably sincere moment, and seems quite savvy.

As he talked up his last album, 2017’s ‘÷’, Sheeran told The Guardian that he fought to keep ‘Galway Girl’ on the tracklist by telling his record label that “there’s 400 million people in the world that say they’re Irish, even if they’re not Irish… And those type of people are going to fucking love it.” If a decent proportion of Sheeran’s fanbase have just become parents too, perhaps they’ll join him in playing ‘Sandman’ for their newborns.

So, ‘=’ adds up to another album on which Sheeran comes off like a millennial Lionel Richie – namely, a very gifted singer-songwriter who’s sometimes sunk by his saccharine streak. When Sheeran gets a Glastonbury legends slot in 25 or 30 years’ time, he’ll probably nail it as Richie did in 2015 with a joyous procession of gold-plated hits. But for now, his persistent bad habits make this album a little less enjoyable than it could be.