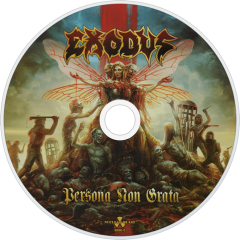 Persona Non Grata is the eleventh studio album by American thrash metal band Exodus, released on November 19, 2021. It is their first studio album since Blood In, Blood Out in 2014, and their second to feature vocalist Steve "Zetro" Souza since he returned to the band that same year. This album also features guest appearances from former Exodus guitarist Rick Hunolt and guitarist Lee Altus' bandmate in Heathen, Kragen Lum, who both provide guitar solos on one of the album's tracks, "Lunatic-Liar-Lord".

Plans for the follow-up to Blood In, Blood Out were made as early as 2016, and work on the album had been slowed down by relentless tour schedules and guitarist Gary Holt's commitments with Slayer, until the latter disbanded in 2019 following a farewell tour. The recording sessions of Persona Non Grata took place from September to October of 2020, with the album being fully completed in January 2021. The album was initially set for release in the summer of 2021, but it was pushed back to November, due to drummer Tom Hunting's diagnosis with squamous cell carcinoma of the stomach.