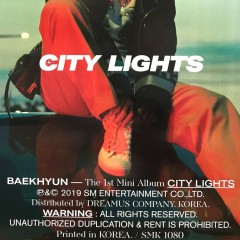 On June 10, 2019, it was announced that Baekhyun will debut as a solo artist in July. At midnight on June 20, the album's title and release date were announced. SM Entertainment began releasing teasers on July 2 through EXO's official social media accounts. Additionally, Baekhyun posted a teaser for his debut through a vlog on his official YouTube channel.

'City Lights' has six songs which feature R&B, hip hip hop and pop genres. The album's title track "UN Village" is a romantic R&B love song that combines groovy beats and string sound with sensational lyrics about a romantic moment a couple share under the moonlight of UN Village hill.