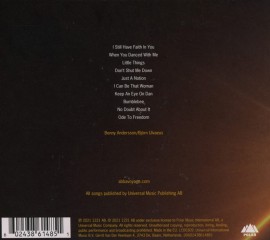 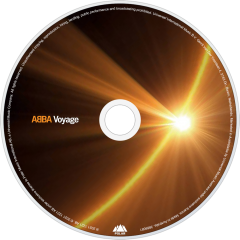 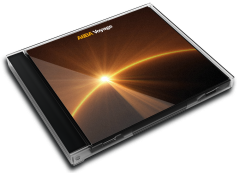 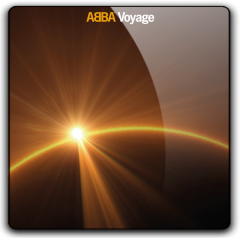 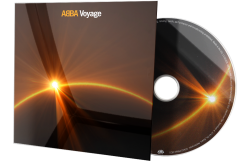 Voyage is the upcoming ninth studio album by Swedish group ABBA, scheduled to be released on 5 November 2021. It is the group's first album of new material in 40 years following The Visitors (1981) and their disbandment in 1982.

The album was announced on 2 September 2021 in a YouTube livestream. ABBA announced in 2018 that they had recorded two songs, "I Still Have Faith in You" and "Don't Shut Me Down", which were announced as the lead singles from the album in the livestream. The group also announced the ABBA Voyage digital avatar concert alongside a 10-piece band, beginning on 27 May 2022, to be held at London's Queen Elizabeth Olympic Park.

A website, abbavoyage.com, went live on 26 August 2021, billboards were erected in London, and social media accounts titled "ABBA Voyage" were set up to promote the announcement.

Its track listing contains 10 songs, two of which, "Just a Notion" and "Bumblebee", were previously included in demo versions as part of the medley "ABBA Undeleted" from the Thank You for the Music box set released in 1994.

Production
Background
ABBA had unofficially split up in 1982, and despite renewed interest in the band from the 1990s onwards, following the worldwide success of their greatest hits album ABBA Gold, the musical Mamma Mia! and the subsequent film of the same name, the members had repeatedly refused to reform, reportedly turning down an offer of $1 billion in 2000 to perform again. In July 2008, Björn Ulvaeus told The Sunday Telegraph, "We will never appear on stage again. There is simply no motivation to re-group." He repeated the statement in an interview in 2014 while promoting the publication of ABBA: The Official Photo Book.

On 6 June 2016, ABBA did reunite, singing "The Way Old Friends Do" at a private party in Stockholm. Two years later, in April 2018, they announced they had recorded two new songs, "I Still Have Faith in You" and "Don't Shut Me Down".

Songs were initially intended to support a TV special produced by NBC and the BBC, but this was later changed to the "ABBAtar" tour announced months prior.

ABBAtars
The digital avatars of the band that will appear during the ABBA Voyage concerts, dubbed the "ABBAtars", were first announced in September of 2017, with Benny Andersson saying that it would take time to make their faces, and Ulvaeus saying that he was excited about how technology is advancing. The tour was originally set for 2019, but due to technical delays and the COVID-19 pandemic, it was pushed back to 2022. The ABBAtars have the same technology of the Tupac Shakur pseudo-hologram from 2012, with 3D avatars accompanied with a live band. The members themselves were in motion capture suits for the avatars, with graphics by Industrial Light & Magic.

Commercial performance
The album recorded 40,000 UK pre-orders in the first 24 hours following the announcement of its release. Three days after the album was announced, it received over 80,000 pre-orders in the UK alone, breaking the record for the biggest pre-ordered album for Universal Music Group UK, which was previously held by Progress (2010) by Take That.

User Album Review
Nearly 40 years after their break-up, Abba’s reunion album upholds the contradictory legacy of the very first Swedish pop powerhouse. Half of this record finds hatchet-burying divorcés Benny Andersson and Anni-Frid Lyngstad, Agnetha Fältskog and Björn Ulvaeus returning as titans of emotionally literate pop. There are songs here with a cinematographic grasp of gesture allied to countermelodies of aching prettiness, almost casually thrown away. In the very same breath, though, Voyage packs in a surfeit of hokey oompah and two Christmas tunes too many. The saccharine children’s choir on Little Things is an inevitability; cynically, Andersson and Ulvaeus probably wanted a slice of the never-ending fruited royalty pudding that comes with Christmas-themed songs.

In short, Voyage is an album that asks: “Which Abba are you – frothy or full-on?” as you hit the skip button. But you’ll be glad Abba made it. Both a monument to bittersweet pop erudition and a mass-market sop, it finds all four singers in strong voice, their effortless harmonies evidence of much water having flowed under Stockholm’s bridges, interpersonally speaking.

Crucially, given even Paul McCartney’s urges to get with the times on his Greg Kurstin and Ryan Tedder-produced Egypt Station album of 2018, Abba aren’t trying to be contemporary. Andersson and Ulvaeus tune out all the chart noise of the past decades; neither Fältskog nor Lyngstad has taken to melisma or mumble rap. One track, Just a Notion, actually dates from the sessions for 1979’s Voulez-Vous album. The perky penultimate track, No Doubt About It, merely sounds like it does.

You can hear the odd update. Andersson and Ulvaeus have levelled up the technical specs that were available to them 40 years ago while still cleaving close to the blithe, minor-to-major-to-minor-key Abba template. Their classical tendencies, previously more leashed, are given fuller rein in some lavish string arrangements. Ode to Freedom, the somewhat cryptic closing track, has an unabashedly orchestral bent.

Untouched by the years, Fältskog’s and Lyngstad’s voices actually sound more similar than they used to, making it hard to work out who is taking the lead vocal. In an interview with Swedish radio, Fältskog alludes to this “marriage” of their voices – and her intention to keep rekindled Abbamania at arm’s length.

This Voyage was by no means certain. After decades of reunion naysaying, by 2018 it was clear that Abba, buoyed up by theatrical and film successes, were cooking up a hi-tech live experience. That curtain rises in early 2022, when four imperial period “Abbatars” created with motion capture technology will deliver the music of peak-period Abba in a specially built arena in east London.

As Andersson and Ulvaeus tell it, new tunes snowballed from the idea that any set list their virtual avatars might “play” should include a couple of fresh tracks. When footage emerged of the four seventysomethings gathered around a piano, lyrics in hand, it felt like a triumph of Nordic steadfastness in a super-heated world full of suboptimal outcomes.

So let’s take Voyage as unexpected evidence that hope is not a fool’s game. It helps to ignore the album’s cheesier shortcomings – the John Lewis ad-gone-supernova that is Little Things, with its simpering talk of stocking fillers, or the Celtic pop of When You Danced With Me, or the well-intentioned, but misfiring environmental ballad, Bumble Bee – and cut straight to the bleeding heart of Abba’s best craft.

On break-up songs such as The Winner Takes it All or Knowing Me, Knowing You (at least before Alan Partridge hijacked it), the “boys” – Andersson and Ulvaeus – had always put words in the mouths of the “girls” – Fältskog and Lyngstad – to sing. By and large, despite this imbalance of power, the feelings conveyed in Abba songs have been believable, sensitive, even.

Here, Don’t Shut Me Down, the better song of the pair of singles released in September, finds Abba telling the story of their return (“I’ve been reloaded!”) while the song’s flawed central character begs eloquently for a second chance at love. Another fully realised vignette, I Can Be That Woman, comes from a similar place.

A couple argue in front of a dog, with Fältskog’s protagonist alluding to an alcoholic past that she has overcome in her hopes to be a better partner. “The dog, bless her heart, licks my fingers, but she jerks every time you swear” is a lyric that perhaps doesn’t sing when isolated on the page, but it renders the homely, fraught scenario in high definition.

Keep an Eye on Dan, meanwhile, finds a parent anxiously dropping a child with his dad for his tenure of the custody agreement, then driving around the corner and punching the car steering wheel in abject misery. This is what we pay Abba for – mature storytelling awash in melody.