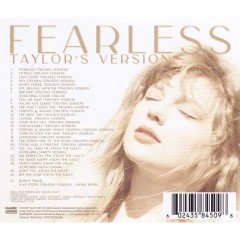 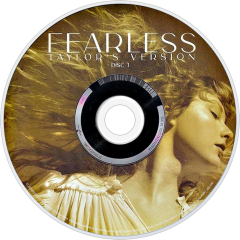 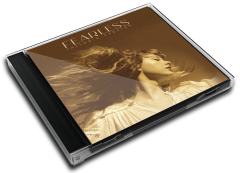 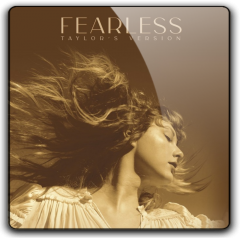 Fearless (Taylor's Version) is the first re-recorded album by American singer-songwriter Taylor Swift, released on April 9, 2021, through Republic Records. It is a re-recording of Swift's second studio album, Fearless (2008), and the first in the series of six re-recorded albums Swift has planned to release, following the dispute regarding ownership of the masters to her first six studio albums.

Consisting of re-recorded versions of all of the 19 tracks from the Platinum Edition (2009) of Fearless, Swift's 2010 soundtrack single "Today Was a Fairytale", and six bonus "from the Vault" songs that were witheld from being included on the original Fearless or its Platinum Edition, there are 26 tracks on Fearless (Taylor's Version), twelve of which were solely written by Swift. Recreating the album musically, the re-recorded tracks were produced by Swift and Christopher Rowe, using the same touring band that played the instruments on the original, whereas the newly added tracks were produced by Swift, Jack Antonoff and Aaron Dessner. Colbie Caillat returned to feature on "Breathe", while Maren Morris and Keith Urban contributed guest vocals on vault tracks "You All Over Me" and "That's When", respectively.

The album was preceded by three of its songs, all of which entered the top 10 of the Billboard Hot Country Songs chart: "Love Story (Taylor's Version)" topped the chart, "You All Over Me" landed at number six, followed by "Mr. Perfectly Fine" reaching number two. Fearless (Taylor's Version) received critical acclaim, with emphasis on nostalgic sentiment, and Swift's strong, matured vocals; reviews commended the precise replication of the original compositions but with a crisper production quality. Commercially, it topped the charts in Argentina, Australia, Canada, Ireland, New Zealand, Scotland, the United Kingdom, as well as the United States, where it marked the first ever re-recorded album to reach number one on the Billboard 200 chart.

User Album Review
Taylor Swift left her longtime home of Big Machine in 2018, setting up shop at Republic Records. Usually, such changes in label are only of interest to trainspotters, but once Swift departed Big Machine, the label was acquired by a group owned by Scooter Braun, a nemesis of Taylor's. The singer attempted to regain rights to her original recordings to no avail, leaving her with one option: she could re-record her records, thereby undercutting the value of her catalog in terms of syncs, placements, and licensing. Swift carried through on the promise in April 2021, releasing Fearless (Taylor's Version), a brand-new version of her 2008 breakthrough. Swift recorded all 19 songs from the 2009 Platinum Edition of Fearless, adding a new version of "Today Was a Fairytale" from the Valentine's Day soundtrack, then six additional songs ("From The Vault") -- songs that were written around the time of Fearless but not released. These tracks are of greatest interest, as they certainly have a younger, dewy-eyed perspective but were recorded with Aaron Dessner and Jack Antonoff, the producers of Swift's mature work. The blend of youth and experience is appealing, and it can also be heard in the newer renditions of the Fearless material. Swift largely re-creates the arrangements and feel of the original 2008 album, yet her voice and phrasing has aged, giving the music a hint of bittersweet gravity. That said, it's only a hint; Fearless (Taylor's Version) serves the purpose of offering new versions that could be substituted for the originals for licensing purposes. It's to Swift's credit that the album is an absorbing (if long) listen anyway.