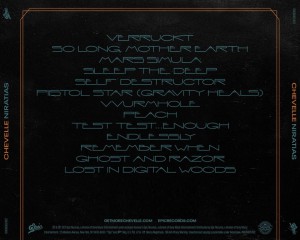 Niratias is the ninth studio album by American rock band Chevelle, released on March 5, 2021 on the Epic label. It was preceded by three singles: "Self-Destructor", "Peach", and "Remember when". The album was produced by Joe Barresi and is their first studio album in five years, the last being 2016's The North Corridor. It is also their first album as a two-piece, as bassist Dean Bernardini left the band in late 2019. Unlike previous Chevelle albums, Niratias is considered to be a concept album, using more instrumental and spoken word tracks, dealing with themes such as interstellar travel, mistrust in leadership, loss, and the past.