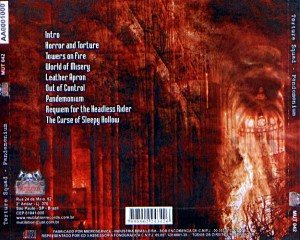 Pandemonium is the fourth album of the Brazilian death/thrash metal band Torture Squad, released 14 October 2003 through Mutilation Records.
The themes of the songs are basically political/anti-war songs like in "Pandemonium" and "Towers On Fire" (Which deals with the 9/11 attack in the US), poverty like in world of misery, and horror like in "Horror and Torture".