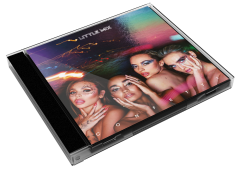 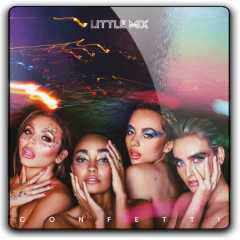 Confetti is the sixth studio album by British girl group Little Mix. The album was released on 6 November 2020, by RCA Records. The record was preceded by three singles: "Break Up Song", "Holiday" and "Sweet Melody". Upon release, the album received mostly positive reviews.

Background
On 12 March 2020, Little Mix released a music video for LM5's album track "Wasabi". At the end of the video, the album cover for LM5 is seen standing on a platform before being thrown out by a explosion of confetti, followed by the message 'New Era Pending'.

On 16 September 2020, Confetti was announced across multiple social media platforms by Little Mix, revealing the release date to be 6 November 2020, as well as the album art and the title. On 18 September, streaming services released pre-orders of the album. The standard edition has 13 tracks. On 27 October, Little Mix partnered with Amazon Alexa to release the official track listing. Fans were encouraged to say "Alexa, drop some Confetti" and they would receive a track name. The next day, 28 October, the full track listing was confirmed.

The album was "pretty much finished" before the COVID-19 pandemic lockdowns were implemented, with "little tweaks" still to be made. As restrictions eased, each of the members individually visited the studios to add "final touches", whereas for their previous albums, they would complete the album process together. Member Perrie Edwards noted that it was a "weird process", but that they felt they had to complete it due to wanting "everyone to hear it". Member Jesy Nelson noted the contrast between Confetti and LM5 (2018), stating that LM5 was very "girl power", whereas with Confetti, she said: "With this album, we just had fun and wrote songs that we liked and it came together". Member Jade Thirlwall agreed with Nelson, adding: "Not every single song has to have this super deep meaning. People know what we’re about now and know what we stand for. I think LM5 was very much about solidifying that, whereas with this album it is just about writing brilliant pop songs that we love." Confetti was described by member Leigh-Anne Pinnock as the group's "biggest" album yet.

Composition
The opening track, "Break Up Song", is a 1980s synth-pop "kiss-off anthem" that has been compared to "The Boys of Summer" by Don Henley. "Holiday" has a "post-Daft Punk" feel and is set to house beats. "Sweet Melody" is a "TikTok-ready" song with reggaeton beats. Lyrically, the song is about getting over an ex-boyfriend. The title track is reminiscent of a compilation of early 2000s hits.

"Happiness" is a Europop and R&B song that has a "skillfully cheesy melody". "Not a Pop Song" has been described as having a "big sunny chorus", and is "perfectly pitched as the final stage of reality-TV rebellion". The lyric "I don't do what Simon says / Get the message 'cause it's read" received praise from critics for calling out Simon Cowell, their former manager. "Gloves Up" has a clattering rhythm that is reminiscent of 2000s R&B. "A Mess (Happy 4 U)" has been described as "the perfect balance between melodic pop sugar rush and sonic invention".

"My Love Won't Let You Down" is a gospel piano ballad. "Rendezvous" is a contemporary pop song with hints of retro, and has been compared to the work of the Pussycat Dolls, particularly their song "Buttons". The song has also been described as "sexy, radio-friendly, but still with a distinct sense of cheeky humour and fantasy". "If You Want My Love" is an R&B song, and has drawn comparisons to TLC and Destiny's Child. The closing track, "Breathe", has been described as a "moving torch song", and its lyrics are about heartbreak.

Album Review
In 2018, a few days before the release of Little Mix’s last album, the quartet announced their split from Simon Cowell’s Syco company, which had shepherded their career since they won The X Factor in 2011. You didn’t have to delve too deeply to understand that the split was not terribly amicable. Cowell took to the tabloids, protesting the band’s lack of due deference. “Why do artists think they’re more important than staff members? They’re not,” he wailed, indicating precisely why artists might not want to hang around Syco too long.

Freed from pop’s dark overlord, Little Mix proceeded to launch their own TV talent show, The Search, a direct competitor to Cowell’s ailing X Factor. The ratings suggested the public might be sick of TV talent shows regardless of who’s on the judging panel, but you couldn’t knock it as an act of aggression – the light entertainment equivalent of tanks on the lawn. Now their first post-Cowell album arrives, heralded by a single that snaps: “I don’t do what Simon says.” “Be a puppet on a string,” runs Not a Pop Song; “Works for you, but not for me.” The chorus, meanwhile, is designed to be bellowed along to en masse in arenas illuminated by frantically waved glow sticks and rent with screams: “Anything is better than another pop song about falling in love, but if you wanna sing along, say, ‘I don’t give a what’.”

This is fine, rollicking stuff – criticism of the manufactured pop industry is always more piquant when it comes from within – that sets the listener up for a new era in the career of Britain’s most successful girl band: unleashed from shadowy controlling influences, able to do, and indeed sing about, whatever they want. The problem with Confetti is that it suggests that what Little Mix want to do in their new, unleashed state isn’t particularly different from what they did when they were, as Not a Pop Song puts it, “hamster[s] on a wheel”. You’d be hard pushed to differentiate it from its predecessor, save for the fact that LM5 seemed overly concerned with bolstering Little Mix’s waning fortunes in the US: this time out, there are no guest appearances from Nicki Minaj, and the vocals seem less intent on mimicking the slurred delivery of a mumble rapper.

Otherwise, it’s business as usual. The sound frequently feels like a box-ticking exercise in current pop trends: 80s-inspired, Boys of Summer synths on Break-Up Song; reggaeton beat on Sweet Melody; post-Daft Punk house on Holiday; gospel-ish piano balladry on My Love Won’t Let You Down; vocals cling-filmed in Auto-Tune throughout. It’s all very well done without ever quite reaching the heights of their best singles, Black Magic and Shout Out to My Ex, two spectacular examples of the songwriter-for-hire’s craft. Sweet Melody stands out, its faintly irritating vocal hook overwhelmed by its dirt-dishing lyrics about fellow pop star ex-boyfriends (“He would lie, he would cheat, over a syncopated beat”), while the Europop melody of Happiness skilfully stays the just right side of cheesy.

Nevertheless, it’s quite odd listening to Not a Pop Song’s bold announcement that there will be “no more singing songs about breaking my heart and my lonely nights dancing in the dark” in the middle of an album packed with songs about broken hearts (“My baby don’t love me no more and it hurts like hell,” complains Breathe) and which literally opens with a song about a lonely night spent dancing in the dark: “I’ve found a way to dance without you – in the middle of the crowd I forget about the pain inside.”

The sense of a band keen to have their cake and eat it is ameliorated when the album’s production steps lightly into more adventurous territory. The clattering rhythm track of Gloves Up recalls the experimentation found in early 00s R&B A Mess (Happy 4 U) strikes the perfect balance between melodic pop sugar rush and sonic invention, shifting after two minutes into a dark cloud of sampled panting, booming drums and distorted vocals. Maybe Not a Pop Song is talking about the future, rather than the here and now: it isn’t inconceivable that Little Mix, whose members have been vocal about issues ranging from racism to online bullying and mental health, might shift their focus as promised, although it’s probably best not to hold your breath. As it is, Confetti is exactly what you would expect from the band: a solid mainstream pop album – even when it’s claiming that it isn’t.