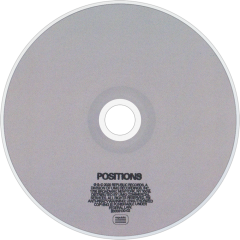 Positions is the sixth studio album by American singer Ariana Grande, released on October 30, 2020, by Republic Records. It is a midtempo R&B and trap-pop album that primarily discusses themes of sex, and features guest vocals from Doja Cat, the Weeknd and Ty Dolla Sign.

Two singles have been released to promote the album; the title track was released as the lead single on October 23, 2020, and "34+35" was made the second single alongside the album release on October 30. Positions received generally favorable reviews from music critics, with compliments towards Grande's vocals but criticism for its lyricism and production.

Background
On April 19, 2020, it was first reported that Grande was working on new music. She also declared in May 2020 that she had recorded a song with Doja Cat earlier that year. In the same interview, however, Grande stated that she would not release an album during the COVID-19 pandemic lockdown. On October 14, 2020, Grande announced on social media that her upcoming sixth studio album would be released the same month. Three days later, she posted a slow-motion video in which she types out the word "positions" on a keyboard. That same day, Grande's official website launched two countdowns counting down to October 23, 2020 and October 30, 2020. On October 23, 2020, she confirmed via her Twitter account that the album was coming on October 30 and posted the cover art. The tracklist was revealed the following day.