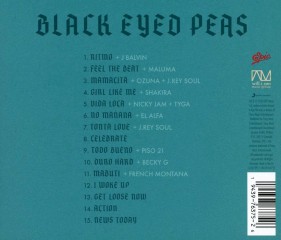 Translation is the eighth studio album by American pop rap group Black Eyed Peas. It was released on June 19, 2020, by Epic Records. The album features guest appearances from Shakira, J Balvin, Ozuna, Maluma, Nicky Jam, Tyga, El Alfa, Piso 21, Becky G, and French Montana.
The track listing was revealed on June 11, 2020, alongside the album announcement. "No Mañana" was released as a promotional single on June 12, 2020, along with the album's cover art. The album was also promoted with two Hot Latin Songs chart toppers, "Ritmo (Bad Boys for Life)" and "Mamacita".

Translation was released on June 19, 2020, by the group's BEP label and Epic Records. The following week, it sold 15,000 album-equivalent units, measured largely from streaming revenue – 14 million streams of album tracks through on-demand services, measured as 10,000 streaming equivalent albums – while 4,000 units were traditional album sales. The performance earned the album a chart debut at number 52 on the Billboard 200 and at number three on the Top Latin Albums, which was the group's first top-five appearance on the latter chart. The album is their first to enter the Billboard 200 chart since The Beginning in 2010 and Fergie's departure from the group.

User Album Review
Translation was met with generally positive reviews. At Metacritic, which assigns a normalized rating out of 100 to reviews from professional critics, the album received a weighted average score of 63, based on four reviews.[8]

Reviewing in June 2020 for Rolling Stone, Gary Suarez said the "often clunky" album shows the group exploiting the contemporary Latin pop trend, albeit with occasional charm.[11] In Variety, A.D. Amorosi believed songs such as "I Woke Up" and "Get Loose Now" sound as if they were focus grouped for Latinx audiences, but said of the album overall, "BEP have found a new sense of adventure, inventiveness and contagion through the modern Latin music prism."[13] Ingrid Angulo from Hot Press was more impressed, applauding their foray into reggaetón and saying, "The collaborations are seamless and the tracks as catchy as ever, cementing the modern global success of Latin-inspired dance music."[14] Tom Hull was also relatively positive, writing in his blog, "Seems like they had a perfectly functional hip-hop/funk album on tap for summer release, then wound up adding a most atypical and remarkable topical song, 'News Today.'"