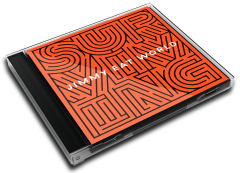 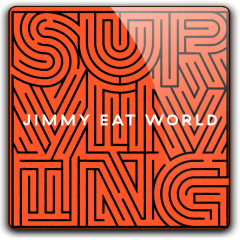 Album Review
Their last effort floated in on shimmering acoustics and soaring, ethereal vocals, but Surviving cuts right to the chase with very down-to-earth electric chords and familiar, memorable song structures. With a group as renowned as Jimmy Eat World, there’s always a tradeoff to be had. Fans of the group’s most infectious pop-rock tunes might hail this as a “return to form”, while disciples of their moodier, atmospheric side (a la Futures or Integrity Blues) will inevitably see it as two steps backwards. It’s this kind of catch-22 that makes loyalty to their own intentions so important, because there’s never going to be an all-in-one Jimmy Eat World record that will please team Clarity, team Futures, team Chase This Light, and so on. To that tune, Surviving is very much its own animal, and to pull a “sounds like” comparison would be a cop out. It may be stripped down, but it’s a Jimmy Eat World album through and through, and that means that if you spend enough time with it you’re almost certainly going to love it.
Surviving is something of a misleading title for Jimmy Eat World’s tenth full-length album, because the implication is that their head is barely above water; that they’re doing just enough to get by. This has never been a bare minimum kind of band – they pour their heart into every album and that’s something that hasn’t changed since their debut hit shelves in 1994. A better title might have been Thriving, because this record continues their remarkably consistent run and proves that they are still very much at, or at least near, the top of their game. The intentional scaling back of ambition in the studio might leave something to be desired from an atmospheric/aesthetic standpoint, but otherwise Jimmy Eat World continues to churn out superbly written, insanely memorable alt-rock like it’s effortless. Enjoy another round of memories, on them.
Reviewed by sputnikmusic.com.