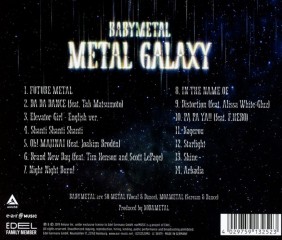 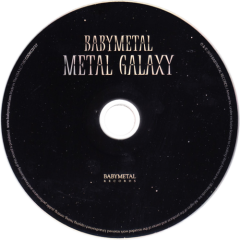 "Metal Galaxy" is the third studio album by Japanese heavy metal band Babymetal. Released on October 11, 2019 worldwide, in Japan under BMD Fox Records (early on October 8, 2019), in Europe under earMusic, and elsewhere under Babymetal Records. The album is stated to contain elements of music throughout the world.

Album Review
Babymetal has done the incredible yet again! With their latest offering ‘Metal Galaxy’ the band has once again proved to be an unstoppable force! ‘Metal Galaxy’ explores so many possibilities with metal all in one album, all while making every song thoroughly enjoyable! This album is also what you would use to show someone that tasty modern metal tone and production value! I do not think that this album has been overproduced at all. The production is a beautiful match with the sounds of the band and everything fell in place. What makes this album groundbreaking apart from the music itself is that it seems like this is a metal band’s foray into the Spotify Sound, a sound characterized by shorter song lengths on average within 3 to 4 mins, catchy rhythm sections, and intros that will keep you hooked to the rest of the song. All in all, ‘Metal Galaxy’ by Babymetal is one solid and well-routed album of epic proportions! There is no reason to miss this stellar record! Babymetal knows what fits and works well and well, they make it work!
Reviewed by Roshan Machayya for metalwani.com.