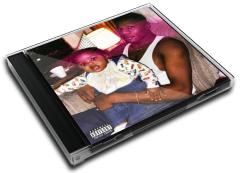 Kirk is the second studio album by American rapper DaBaby. It was released on September 27, 2019, through Interscope and Billion Dollar Baby.

Background
DaBaby released his debut studio album Baby on Baby on March 1, 2019. Almost six months later on August 26, he revealed his next album's title to be Kirk, an homage to his last name.