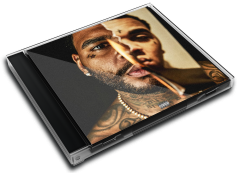 I'm Him (His Imperial Majesty) is the second studio album by American rapper Kevin Gates. It was released on September 27, 2019, via Atlantic Records and Bread Winners' Association.

Background
On January 10, 2018, Gates was released from prison. His return to social media saw him posting a picture with the phrase "I'm Him", many fans speculating it to be the title of his second album. On June 28, 2019, Gates announced the album along with the release of the album's lead single "Push It", with "I'm Him" as the official album title. On September 17, Gates announced the release date on social media. "I'm Him" serves as his second studio album, following his debut album in early 2016. The album follows four months after May 2019's Only the Generals Gon Understand EP.