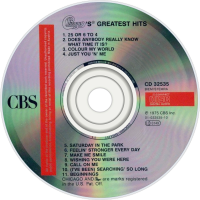 Chicago IX: Chicago's Greatest Hits is the first greatest hits album, and ninth album overall, by the American band Chicago and was released in 1975 by Columbia Records in both stereo (PC 33900) and SQ quadraphonic (PCQ 33900) versions.

Including all of Chicago's biggest hits to date, this set stretches from their 1969 debut, Chicago Transit Authority, to 1974's Chicago VII. Chicago VIII and its hits, having only come out just months earlier, were considered too recent to anthologize, while Chicago III's material was overlooked for inclusion due to its lack of top-selling singles.

Chicago IX proved to be an enormous success upon its release. It reached #1 in the US and remained on the Billboard 200 for a total of 72 weeks. It has since been certified quadruple platinum by the RIAA, signifying sales of over five million copies. Even though 2002's The Very Best of Chicago: Only the Beginning superseded it, Chicago IX was also reissued by Rhino Records, Chicago's current distributor. The album did not chart in the UK. This album was mixed and released in both stereo and quadraphonic.

User Album Review
AllMusic Review by Stephen Cook
Does anyone need another Chicago album besides this one? For the casual fan, the answer is definitely no. The 1975 blockbuster includes all the band's hits from its prime. And while tracks like "Wishing You Were Here" and "Feelin' Stronger Every Day" have worn a wee thin over the years, most of the cuts here are still topnotch. Standouts include the incomparable "Saturday in the Park," "Beginnings," and "Does Anybody Really Know What Time It Is?" When rock grew up with horns, jazz charts, and chops. Not as snide as Steely Dan or as soulful as Blood, Sweat & Tears, Chicago still delivered with the 11 fine sides heard here.