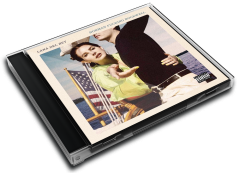 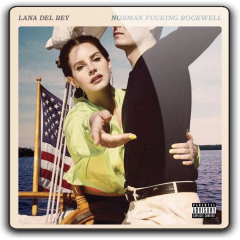 Norman Fucking Rockwell is the sixth studio album and fifth major-label record by American singer Lana Del Rey, released on August 30, 2019. The first singles from the album, "Mariners Apartment Complex" and "Venice Bitch", were released in September 2018, followed by "Hope Is a Dangerous Thing for a Woman Like Me to Have – but I Have It" and "Doin' Time" in 2019. The album title was announced in an interview with Zane Lowe for Beats 1 in September 2018. The album was primarily produced by Del Rey and Jack Antonoff, with additional contributions from Zach Dawes, Andrew Watt and longtime Del Rey collaborator Rick Nowels. Musically, Norman Fucking Rockwell is a psychedelic rock and trip hop record, with desert rock and classic rock influences.

Background and release
Del Rey first mentioned follow up material to 2017's Lust for Life during an interview with Pitchfork in January 2018, at the 60th Annual Grammy Awards. She said, "I’ve got a couple of other tracks. I’ve got this weird track called ‘Bartender’ that doesn’t belong to a record yet."

The album's title was announced by Del Rey in September 2018, upon the premiere of the single "Venice Bitch" on Zane Lowe's Beats 1 show World Record. In her interview with Lowe, Del Rey revealed that the album was nearly complete, and that she had recorded eleven tracks for it.

Throughout 2018, Del Rey shared snippets via social media of several songs intended for the album, including "Happiness Is a Butterfly", "How to Disappear", and "Cinnamon Girl". She performed "How to Disappear" on October 29 at the Brooklyn Academy of Music, debuting the full song for the first time.

In a June 2019 concert in Ireland, Del Rey announced that the album would be released in August.

On August 2, 2019, Urban Outfitters announced an exclusive vinyl of the album featuring an alternative album artwork. The alternative cover was also shot by Chuck Grant.

Promotion
Singles
"Mariners Apartment Complex" was released as the album's first single on September 12, 2018. The following week, on September 18, Del Rey released the second single "Venice Bitch" and revealed the album title. "Hope Is a Dangerous Thing for a Woman Like Me to Have – but I Have It" followed as the third single on January 9, 2019. Del Rey released a cover of Sublime's "Doin' Time" on May 17, 2019 for a documentary about the band. It also served as the fourth single from the album. On August 22, 2019 the singles "Fuck It, I Love You" and "The Greatest" were released with a double music video. The music video runs at 9:19 minutes long, with the same shoot as the album trailer.

Album trailer
A trailer for the album was released on August 1, 2019. It features three of the album's singles—"Doin' Time", "Mariners Apartment Complex", and "Venice Bitch"—as well as the title track.

Album Review
Lana Del Rey's fifth album, 'Norman Fucking Rockwell!' contains multitudes. The way she balances and embodies them on this well-rounded record is nothing short of stunning

In Lana Del Rey’s Twitter bio you’ll find a quote from Walt Whitman’s 1892 poem Song Of Myself. It’s an unsurprising move for someone who’s spent much of the last decade carving out her niche as a 21st-century pop poet documenting, much like Whitman did, her own perspective of America.

The quote itself – “Do I contradict myself? Very well then, I contradict myself; I am large – I contain multitudes” – feels like an apt one for this point in Del Rey’s career. Since she broke through with ‘Video Games’ in 2011, she’s been pegged as music’s resident “sad girl”. In 2017, she challenged that label as she beamed at the world from the sleeve of her fifth album ‘Lust For Life’. The narrative was that she was happy now but, as Whitman himself alluded, life doesn’t have a single focus and no one is consistently one thing through it all.

On ‘Norman Fucking Rockwell!’, Del Rey is many contradicting things. She is hopelessly in love and resigned to misery, an emotional crutch and a “fucking mess”, willing to forgive the men in her life and disappointed in those who orbit in the same circles as her. It’s an album of emotional ups and downs but one that feels, perhaps thanks to her past habit of filtering things through a world of old Hollywood glamour and soft-focus romanticism, like her realest one yet.


There’s nothing soft or romantic about this record’s opening lines. “Goddamn manchild/You fucked me so good that I almost said ‘I love you’,” she sings on the title track, gentle piano rolling beneath her. As she continues, she paints a fuller picture of the target of her words – a fun and wild “self-loathing poet” who blames his inadequate words on the news. As with many of the men in Del Rey’s songs, she openly acknowledges his flaws with a wicked sense of humour, but seems OK to stick it out with him. “Why wait for the best when I could have you?” she asks at one point, as if finding someone better who doesn’t make her feel blue isn’t a realistic option.


On ‘Love Song’, a gorgeous track that drifts on stroked piano notes and the ghostly echo of strings, things are a little better. “Oh, be my once in a lifetime,” she murmurs serenely, as if she’s whispering her desires to a sleeping lover. ‘Mariners Apartment Complex’, which swells and strips back like the tide, and the dark, driving ‘California’ find her offering to hold someone up and guide them through gloomier days (“You don’t ever have to be stronger than you really are/When you’re lying in my arms,” she promises on the latter), while ‘Happiness Is A Butterfly’ has her almost nihilistically accepting a tragic fate. “If he’s a serial killer then what’s the worst/That can happen to a girl who’s already hurt?” she asks with the air of someone always expecting the worst. “If he’s as bad as they say, then I guess I’m cursed.”


Overall, ‘Norman Fucking Rockwell!’ isn’t a surprising record – it’s a logical next step for Del Rey to take in a journey that’s seen her grow from hip-hop-flecked pop to bohemian folk. It would be easy for it to feel like Lana Del Rey-by-numbers but she avoids that trap by making something filled with beauty that subtly moves her sound on, ushering her into territory marked “timeless”. For anyone who thought her team-up with Jack Antonoff, a now omnipresent figure in big female pop records (Taylor Swift, Lorde) and this album’s producer, would mean the Bleachers frontman’s brand of crystalline euphoria being injected into the mix, that couldn’t be further from the truth. Everything here feels entirely Lana, exactly as you’d want.


Just because ‘NFR!’ isn’t entirely unexpected doesn’t mean there aren’t any moments that catch you off guard though. For starters, there’s a pretty faithful cover of Sublime’s ‘Doin’ Time’, originally recorded for a documentary about the Long Beach ska-punk band. Del Rey’s version has more of a mystical air to it, but still contains echoes of the original’s dubby grit woven into its witchy atmosphere.

Then, there’s the little utterances that are littered throughout the record that you wouldn’t bat an eyelid to with anyone else but feel odd given how closely linked the person singing them here is with nostalgia and vintage Americana. On ‘The Greatest’ (maybe one of the greatest songs she’s ever written), she sings, “the culture is lit and I’ve had a ball” in a tone that could be incredibly sincere or eye-rolling sarcasm. As the album comes to an end, she throws in a quick nod to modern technology, purring, “Hello, it’s the most famous woman you know on the iPad” on the tender waltz of ‘Hope Is A Dangerous Thing For A Woman Like Me To Have – But I Have It’.

That she veers from the ultra-modern to references to Sylvia Plath and photographer Slim Aarons, and from Laurel Canyon folk to trembling psych solos, on an album named after American author and illustrator Norman Rockwell only seem to prove the point she’s trying to make in her Twitter bio. Lana Del Rey is large – she contains multitudes, and the way she balances and embodies them on her fifth album is nothing short of stunning.