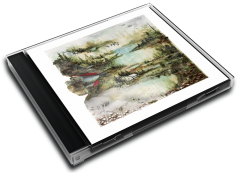 I, I (stylized as i,i and pronounced as "I comma I") is the fourth studio album by American indie folk band Bon Iver. It was digitally released on August 9, 2019, with a physical release to follow on August 30. The album was preceded by the singles "Hey, Ma" and "U (Man Like)", and the tracks "Faith" and "Jelmore" were released alongside the album pre-order. I, I features contributions from James Blake, Aaron Dessner, Bruce Hornsby, Moses Sumney, and Channy Leaneagh, among others.

Background
The project was first teased during an Instagram Live broadcast by Justin Vernon's personal account, in which he revealed a snippet of the song previously known as "We Maddie Parry" (later shortened to "We") and showed a song list with working titles. The band likened the album to the season of fall, with I, I completing a cycle that began with the "winter" of For Emma, Forever Ago (2007), followed by "the frenetic spring of Bon Iver, Bon Iver (2011), and the unhinged summer of 22, A Million (2016)". Vernon additionally described the album as "very much like the most adult record, the most complete" and "more honest, generous work". The album was recorded over an extended period of time at April Base in Wisconsin, and was completed at Sonic Ranch in Texas. On July 31, 2019, the band released a documentary short called Bon Iver: Autumn, featuring Vernon and bandmates discussing the new album and aspects of the upcoming Autumn 2019 tour. To promote the album, listening parties took place on August 7 in several countries.

On August 8, without prior announcement, eight of the album's nine remaining songs were released digitally (one each hour) and the ninth, "Yi", was posted on Reddit. This was followed by the band moving the album's digital release date three weeks forward to August 9. The physical release is still planned for August 30.

Music
I, I has been characterized as chamber folk album. A number of publications have considered its sound to be a merger of the musical elements of Bon Iver's previous three albums, with Chris DeVille of Stereogum considering it the first of their albums "that sounds more familiar than new." Its production includes acoustic guitars, horns, piano, synthesizers, woodwind, organ and interwoven voices along with "jittery electronics," "otherworldly beats, whispering brass and fragmentary structures." Music journalists have noted its electronic and experimental features reminiscent of those found on 22, A Million, but note that it has been used more sparingly than on the aforementioned album, with DIY writer opining that it " the foundation for the record’s truly big moments."

User Album Review
Previous Bon Iver albums worked through the seasons, the hushed 'For Emma, Forever Ago’ representing winter. With 'i, i', Justin Vernon arrives at autumn, a time of change

Those were the words included in a video teasing Bon Iver’s fourth album ‘i, i’. The clip revealed that each previous album has been related to a season: the stunning, award-winning debut ‘For Emma, Forever Ago’ was winter; the lush, self-titled second record spring; and the glitchy, experimental ‘22, A Million’ was summer.


And now, 12 years since it all began, Justin Vernon has reached the end of the cycle, with album number four ‘i, i’ taking the last seat at the table as autumn.

Over the course of the past three albums, Vernon has rapidly expanded his sonic palette. The gorgeous, stripped-back folk of ‘For Emma, Forever Ago’ developed and swelled into the self-titled album’s soaring baroque pop, and then twisted and evolved into whirring electronics of ‘22, A Million’. Each reinvention held Vernon’s distinctive, reassuring vocals at the heart of them, but the instrumentation varied drastically. This time around, though, instead of turning everything on its head one last time, he’s chosen to combine the sounds of the past three releases. Bon Iver has pieced together this fourth album in an impossibly intelligent way.


The crunchy bleeps and bloops that permeated ‘22, A Million’ are present and correct, but they aren’t as obvious and overpowering as they were last time. While ‘Jelmore’ would have fit comfortably on ’22, A Million’, on other cuts such as ‘Faith’ the electronics are complemented by stunning soundscapes that mirror older songs like ‘Holocene’ and ‘Calgary’. Meanwhile the warming folk riffs of ‘Marion’ are reminiscent of ‘For Emma’ or ‘Re:Stacks’, from the first album, yet the sumptuous brass lines finishes are evocative of the brass used throughout ‘Bon Iver, Bon Iver’.

But it’s not just the previous albums that get a look in. The jangling piano and sky-high melodies of ‘U (Man Like)’ hark back to 2009’s ‘Blood Bank EP’ (in particular ‘Babys’), while a collaboration with James Blake, ‘iMi’, bears similarities to their previous team-up ‘I Need A Forest Fire’.

All three previous albums come to heads on album closer ‘RABi’, with a slinky saxophone here and Americana-flecked guitar there. It’s the perfect summation of ‘i, i’ in its entirety, with contradictory instrumental lines gorgeously meshing together, turning the older sounds into something fresh and new. But it also feels bittersweet. With ‘i, i’ marking the end of the album cycle, the possibility of any future Bon Iver music is uncertain.

Yet Vernon leaves those worried about the future with a note of comfort. As ‘i, i’ draws to a close, Vernon, accompanied by tight choral vocals and opulent brass, sings, “Well, it’s all fine and we’re all fine all any way”, to which he later responds with a whispered, echo-y, “But If you wait it wont be undone…”.

Over 12 years the music Justin Vernon has created as Bon Iver has constantly changed, but that doesn’t mean the old sounds have been undone; they’ve been repurposed and reused, evolving into something different – but always as compelling as the Bon Iver of yesteryear.