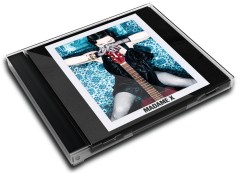 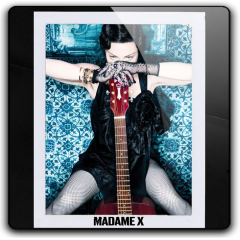 Madame X is the fourteenth studio album by American singer and songwriter Madonna. It was released on June 14, 2019, on Interscope Records. The album follows Rebel Heart (2015) and its first single "Medellín" was released on April 17, 2019. Another single, "Crave", followed on May 10, 2019.

Background and development
In January 2018, Madonna announced on Instagram that she had begun working on her fourteenth studio album. Four months later, in May 2018, she performed at the Met Gala in New York. As part of her performance of her hit single "Like a Prayer", Madonna sang a short segment from a brand new song known as "Dark Ballet" (previously known as "Beautiful Game"). In October 2018, she was featured on the song "Champagne Rosé" by rapper Quavo, who in return became her collaborator on this album.

I started getting invited to people's homes and they have things called living room sessions. So everyone would congregate. People would bring wine, they would bring food, sit around the table. And then suddenly musicians would get up and start playing instruments and singing fado music and morna music and samba music. I was like, 'Wait. What's going on here? Like artists just get up and perform and you don't get paid and they're just doing it for fun and love and passion?
Madonna relocated to Lisbon, Portugal in 2017, seeking a top football academy for boys for her son David, who wanted to become a professional soccer player. However, she later found her life becoming relatively dull, so she decided to meet artists, painters, and musicians. One of the first musicians Madonna met in Lisbon was a man named Dino D'Santiago, who she said introduced her to a great many more musicians in the area, including the Batucadeiras, a collective of drummers who she collaborated with on the track "Batuka" on this album.

Believing "music is the soul of the universe", she felt connected to her new influences, so she then decided to record an album based on her musical experience in the Portuguese city, which she referred to be "a melting pot of culture musically, from Angola to Guinea-Bissau to Spain to Brazil to France to Cape Verde".

During the period while the album was being worked on in Portugal, where she lives, Madonna posted short video clips and images chronicling her work on the album. French producer Mirwais Ahmadzaï, who has previously co-produced three of Madonna's albums, Music (2000), American Life (2003) and Confessions on a Dance Floor (2005), was confirmed to be one of the key producers for Madame X. Mike Dean, who co-produced Rebel Heart (2015), was also enlisted in the album's production. In February 2019, Maluma uploaded a picture on his Instagram account with Madonna in a studio. In her interview with Vogue Italia, Madonna divulged that her album was due for release in 2019. On April 14, 2019, she posted a series of teaser clips on her Instagram account, revealing Madame X as the album title.

Title, artwork, and themes
In a one-minute teaser uploaded to Madonna's official Instagram and YouTube accounts, Madonna declares herself as "Madame X", an alter-ego her album is named after, which is also the title of a 1908 play written by Alexandre Bisson. The video opens with Madonna singing, "The thing that hurt the most was that I wasn't lost...I wasn't lost..."

She then elaborates that Madame X features different personas and characters:

Madame X is a secret agent. Traveling around the world. Changing identities. Fighting for freedom. Bringing light to dark places. She is a dancer. A professor. A head of state. A housekeeper. An equestrian. A prisoner. A student. A mother. A child. A teacher. A nun. A singer. A saint. A whore. A spy in the house of love. I am Madame X.

The character of Madame X frequently exhibits an eye patch, a trait that Madonna later elaborated on an interview for the Today Show to be a "cover up" for a wound.

Madonna claims that she was given the name of the album at the age of 19 by her then dance teacher Martha Graham. According to Madonna, Graham said "I'm going to give you a new name: Madame X. Every day, you come to school and I don't recognize you. Every day, you change your identity. You're a mystery to me."

The album artwork features a close-up of the Madame X persona, with the title etched across her ruby red lips to give the illusion of her mouth being sewn shut. Mike Wass from Idolator called it an "already-iconic artwork" and compared the imagery to that of Frida Kahlo. It is used in most of digital and physical formats of the album, except the digital deluxe and box set, both of which feature another photograph of blonde Madonna.

Composition
According to AllMusic and The Daily Telegraph, the album consists of three main sounds: Latin music, trap music, and art pop.

User Album Review
Bold, bizarre, self-referential and unlike anything Madonna has ever done before, 'Madame X' finds the star with a glint in her eye (the one without an eyepatch, that is)

Madonna’s latest persona ‘Madame X’ borrows her name from the historical figure Virginie Amélie Avegno Gautreau: a socialite and occasional muse who scandalised genteel French society when she bared naked flesh – her entire shoulder, would you believe it – in a portrait. And while Madge’s own eye-patch wearing interpretation prefers taking a more enterprising approach to the current job market (Madame X is a mother, a child, a teacher, a nun, a singer, and a saint many among other things) it’s a fitting moniker for a record that restlessly explores all sides of contemporary pop at full divisive pelt: visiting Latin pop, all-out Eurotrash, gloomily percussive trap, NYC disco, house, and reggaeton.

During its most reckless moments, ‘Madame X’ is bold, bizarre, and unlike anything Madonna has ever done before. The frantic ‘Dark Ballet’ harnesses gloomily spun strings and robotic overlord vocals; it’s as villainous and foreboding as ‘Ray of Light’s darkest moments, or her ‘Die Another Day’ Bond theme. Then, quite out of nowhere, an extended piano interlude morphs into a mangled, glitching excerpt of ‘Dance of the Reed Pipes’ from Tchaikovsky’s ballet ‘The Nutcracker’ – it’s brilliant, overblown ridiculousness. “I want to tell you about love…. and loneliness,” Madonna husks dramatically.

Touching heavily on both these things, ‘Madame X’ explores the state of the world (spoiler: it’s not doing great) at large – as well as Madonna’s place within it – from her new base in Lisbon. ‘Madame X’ isn’t flawless in its vision: at times, Madonna’s attempts to lead the future revolution can come off as ham-fisted. ‘Killers Who Are Partying’ features some absolute clanging missteps: booming lines like “I’ll be Islam if Islam is hated” and “I’ll be Native Indian if the Indian has been taken” seem like tone-deaf expressions of solidarity, especially from a wealthy white woman who seems to be planting herself at the centre of multiple minority narratives. And moments like ‘I Rise’s rehashed quote from the French philosopher Jean-Paul Sartre – “Freedom’s what you choose to do with what’s been done to you” – can border on inspirational fridge magnet territory, too broad to establish real connection.

‘Madame X’ is a far more interesting prospect when the focus moves back onto Madonna herself. ‘Crazy’ – produced by Jason Evigan and Kanye West collaborator Mike Dean – is a self-referential accordion bop: “I bend my knees for you like a prayer,” she sings, pointedly name-checking her 1989 album, and flipping from the original’s religious innuendo, towards doomed, dead-end infatuation “oh god, look at me now”. Elsewhere, the rhythmic whisper of “cha cha cha” on opener and lead single ‘Medellín’ recalls ‘Hard Candy’s ‘Give It 2 Me’.

‘Bitch I’m Loca’, meanwhile, is the sort of swaggering anthem that campy Disney villain Ursula might belt out from the depths: Maluma (who also appears on lead single ‘Medellín’) the ideal sidekick. “Where do you want me to put this?” he drawls with a comedy wink. “You can put it inside” she replies. It’s like Madonna’s diva sketch at the end of ‘Act Of Contrition’ turned Carry On… Madame X. Her cover of ‘Faz Gostoso’ – originally by Brazilian pop star Blaya – is equally great fun. And the House-inflected standout ‘I Don’t Search I Find’ – bringing to mind Shep Pettibone’s production on ‘Vogue’, and repurposing a quote from Pablo Picasso for its title – is just as playful. “Finally, enough love,” Madonna announces.

Throughout her 40-year career, outrage has always tailed Madonna closely; a point which is referenced on the likes of ‘Extreme Occident’ and the vulnerable admissions of ‘Looking For Mercy’ (“flawed by design, please sympathise,” she pleads) . “People have always been trying to silence me for one reason or another, whether it’s that I’m not pretty enough, I don’t sing well enough, I’m not talented enough, I’m not married enough, and now it’s that I’m not young enough,” Madonna recently told Vogue,

In reality, if age wasn’t the chosen topic of the moment, the star would be “too much” of something – anything – else: too sexual, too attention-seeking, too weird, too controversial, too outspoken, too unwilling to disappear quietly into the good night. Instead, Madonna will do no such thing, happiest dancing said night away to the beat of her own creative drum.

For the first time since ‘Confessions on a Dance Floor’, perhaps, there’s a glint in Madonna’s eye; her visible, un-eyepatched one, at least. Sonically restless, ‘Madame X’ doesn’t imitate current pop trends as much as it mangles them into new shapes. A record that grapples with being “just way too much”, ultimately, it refuses to tone things down.