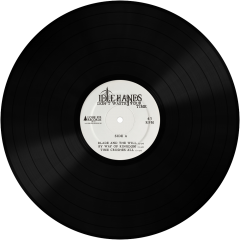 Rising out of ashes of Prosthetic Records' traditional heavy metal quintet Spellcaster like a new wave phoenix, IDLE HANDS is bound to catch the attention of anyone who loves NWoBHM, occult rock or the sleaze of the 80s. Featuring five dark, moody and ballad-esque tracks, Don't Waste Your Time was recorded by Gabe Johnston (Spellcaster) and mastered by the illustrious Brad Boatright (Corrosion of Conformity, Yob). Formed in the heart of the Pacific Northwest in the fall of 2017, IDLE HANDS initially began solely as a creative outlet for former Spellcaster bassist Gabriel Franco, who now handles vocals and rhythm guitar in addition to being the band's sole songwriter. With the first EP under their belt, the band is set to release a full-length and tour heavily in 2019 across Europe and North America.


David Kimbro is credited as bassist, but doesn't actually perform on the EP.

Recorded at Falcon Studios in Portland, OR. November 2017 - June 2018.
Mastered at Audiosiege.