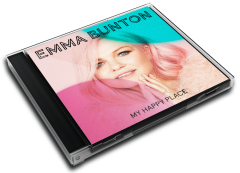 My Happy Place is the fourth studio album by British singer Emma Bunton. It was released on 12 April 2019 by BMG Rights Management. The album consists of ten tracks; eight are cover versions of some of Bunton's favourite songs and two are original songs co-written by the singer.

Background and development
In January 2010, Bunton revealed that she currently has no plans to record a new album. She stated that while she loves singing, it takes a lot of time and work to promote an album and that she would rather focus her time on her son Beau, who was born in 2007. In February 2018, it was reported that Bunton was secretly recording new music. Bunton officially acknowledged the fact that she was recording new music on This Morning in June 2018. In November 2018, Bunton revealed that she had signed a record deal with BMG Rights Management and would be releasing a new album in 2019. The album was officially announced on 25 February 2019. Explaining the album's title, Bunton said: "The reason I called the album My Happy Place is because my happy place is with my family, with my friends, listening to music and being in the studio. All those things came together on this album. While recording it my kids came to the studio, my friends came down, my mum listened to every song over and over again. Being in the studio I just feel so happy".

Singles
"Baby Please Don't Stop" was released as the lead single from the album on 27 February 2019. It has been described as a "smooth slice of sixties-styled pop".

"Too Many Teardrops" was released as the second single on 9 March 2019.