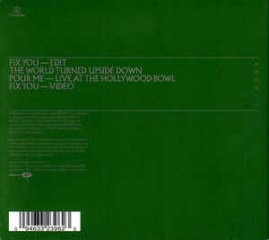 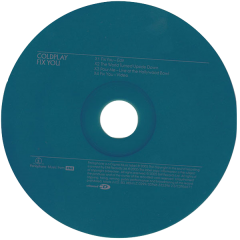 Coldplay released "Fix You" in the UK and US on the 5th of September 2005 as the second single of their third album. The single was pressed with two B-sides: "The World Turned Upside Down" and "Pour Me". On the 14th of September 2005, the band released the Fix You EP in the iTunes Store. In response to Hurricane Katrina, all of the sales went to the American Red Cross Hurricane 2005 Relief and the National Academy of Recording Arts & Sciences' MusiCares Hurricane Relief Fund. Promotional singles were released in the UK and US.

"Fix You"was written by all four members of the band for their third studio album, X&Y (2005). The track is built around an organ accompanied by piano and guitar in the first half and an alternative rock style in the second half featuring electric guitar, bass and drums.

It was released on 5 September 2005 as the second single from X&Y and has reached number 4 on the UK Singles Chart. The song reached number 18 in the United States Billboard Hot Modern Rock Tracks. Promo singles were released for the UK and US. Blythe Danner, the mother of Gwyneth Paltrow and former mother-in-law of Chris Martin, stated in an interview in May 2012 that Martin 'wrote the song for Gwyneth when her father died and I weep every time I hear it'.

"Fix You" was critically acclaimed by music critics. It has been widely sampled, with different covers and sounds. The music video was garnered as a tribute to the 7 July 2005 London bombings. The guitar solo of "Fix You" is currently used as the player introduction at all of the National Hockey League's Montreal Canadiens' home games, during the three stars of the game selection after every Los Angeles Kings home win, and was played at Staples Center as the Stanley Cup was brought on the ice after the Kings' victory in the 2014 Stanley Cup Final. The song is also used for the 2015–16 New York Islanders inaugural season in Barclays Center.

The song was played live at the Steve Jobs memorial/celebration-of-life event at Apple headquarters on 19 October 2011 in Cupertino, California and at One Love Manchester charity concert on 4 June 2017.

When writing the song, lead singer Martin originally intended to use a church-style organ for the track. Unable to gain access to the instrument, Martin instead used an old keyboard that his late father-in-law, Bruce Paltrow, gave to his daughter Gwyneth. However, in other instances Martin has claimed that "Fix You" is influenced by English alternative rock band Elbow's 2003 anthem "Grace Under Pressure".

When asked about the development of the song, Martin said: "My father-in-law Bruce Paltrow bought this big keyboard just before he died. No one had ever plugged it in. I plugged it in, and there was this incredible sound I'd never heard before. All these songs poured out from this one sound. Something has to inspire you, and something else takes over. It's very cloudy." Martin also noted that the song is "probably the most important song we've ever written".

During a track-by-track analysis bassist Guy Berryman admitted that the song takes "a bit of inspiration" from Jimmy Cliff's 1969 song "Many Rivers to Cross". Berryman also added, "It becomes its own thing, kind of like points of inspiration that kind of lead you down certain paths. Whenever you want to write a song like someone else, it ultimately ends up sounding like something different anyway."

The song, which is written in the key of E♭ major, features an organ and piano sound. The song starts with a hushed electric organ ballad, including Martin's falsetto. The song then builds with acoustic guitar and piano, along with a string section during the beginning choruses. The sound then shifts with a plaintive three-note guitar line, ringing through a rhythmic upbeat drum tempo. The song then transitions to its bridge, which roars into an instrumentation of piano notes, electric & bass guitar riffs, drums, and a singalong chorus with an anthemic feel. A synthesizer then joins the instrumentation, during the second half of the bridge. The song finally ends with the beginning chorus, with slow, melancholic piano notes being played in the background.

The message throughout the song, in which Martin sings, is words of encouragement: "Lights will guide you home / And ignite your bones / And I will try to fix you." Michele Hatty of USA Weekend reported that Martin sings about recovering from grief in the song. Travis Gass of the Bangor Daily News wrote that Martin offers his sympathies for the downtrodden, with "When you love someone but it goes to waste / Could it be worse?".

In 2005, Coldplay performed the song live on Saturday Night Live and the Live 8 event in July. It has also become the anthem for the event.

On 19 October 2011, the band played the song at the "Celebrating Steve" event for Apple employees over a global media stream to all the Apple Stores. This event was also available for Apple customers via the company website. On 4 June 2017, Coldplay performed "Fix You" at the One Love Manchester benefit concert for the victims of the 2017 Manchester Arena bombing.

The song received widespread acclaim from music critics. In the Rolling Stone Magazine review of the album, critic Kelefa Sanneh wrote: "One of the best is 'Fix You', an unabashedly sentimental song where Martin delivers words of encouragement in a gentle falsetto Proving once more that no band can deliver a stately rock ballad like this one." Paul McNamee of NME magazine wrote: "It’s a wonderful song that shifts from simple stark piano and voice to a ringing, clattering burst of intent and proto-prog four-part harmony." Adrien Begrand of PopMatters in his review of the album, noted the song as the "best ballad" off X&Y. In 2005, the song appeared at number two on Q magazine's "100 Greatest Tracks of the Year", and was listed as one of the "Tracks of the Year" by NME in 2005.

The music video for "Fix You" was directed by Sophie Muller, who had previously worked with the band for their 2002 video "In My Place". The video was filmed at the end of two concerts on 4 and 5 July 2005 at the Reebok Stadium in Bolton, England, which were the band's first ever stadium performances. The concert goers doubled as extras for the video shoot, which required two takes on each day to complete.

In the first half of the video, Martin, wanders the streets of London starting at Tooley Street under London Bridge station, while the slogan "Make Trade Fair" is projected onto the Royal National Theatre, using the same ITA2 colour scheme on the cover of X&Y. The tunnels that Martin is seen wandering within are located both in and around King's Cross and St Pancras railway stations, with the filming for the video taking place during the time of the redevelopment and expansion of the latter. Martin is then seen walking across Waterloo Bridge, which crosses the River Thames, connecting the South Bank with The Strand. As soon as the electric guitar kicks in, Martin's walk turns into a run as he darts through streets of London, until very quickly reaching the side of the stage at the Reebok Stadium in Bolton, where he joins the rest of the band for the song's finale. The audience sings along with the song's final refrain, and at the end of the video Martin thanks them for their support and wishes them goodnight.

The video debuted on 1 August 2005. It was nominated at the 15th annual Music Video Production Association Awards in the category of Adult Contemporary. After its release, the music video was re-purposed as a tribute to the victims of the 7 July 2005 London bombings, although it was filmed before they occurred.

Album Review
The song received widespread acclaim from music critics. In the Rolling Stone Magazine review of the album, critic Kelefa Sanneh wrote: "One of the best is 'Fix You', an unabashedly sentimental song where Martin delivers words of encouragement in a gentle falsetto [...] Proving once more that no band can deliver a stately rock ballad like this one." Paul McNamee of NME magazine wrote: "It’s a wonderful song that shifts from simple stark piano and voice to a ringing, clattering burst of intent and proto-prog four-part harmony." Adrien Begrand of PopMatters in his review of the album, noted the song as the "best ballad" off X&Y. In 2005, the song appeared at number two on Q magazine's "100 Greatest Tracks of the Year", and was listed as one of the "Tracks of the Year" by NME in 2005.