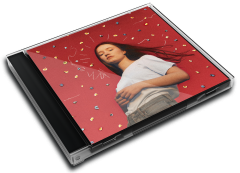 "Sucker Punch" is the debut studio album by Norwegian singer Sigrid, released on 8 March 2019, through Island Records.
Sucker Punch is a pop, electronic pop, and synth-pop album that has been described as navigating "the space between Top 40 success and indie pop credibility.

Album Review
The Norwegian superstar-in-waiting comes good on a debut album laden with potential chart bangers, flexing the edgier side of her likeable pop persona
It’s reassuring that ‘Sucker Punch’ doesn’t feel like a meticulously choreographed and cunning plot to make Sigrid a International Pop Superstar. These songs may well do that all on its own, and its certainly a marvellous cap on a two-year campaign that did just about everything right – but it’s also more than that. ‘Sucker Punch’ is the story of a young adult whose tales of friendship, love and more aren’t just relatable because they’re supposed to be – they simply are.
Reviewed by Thomas Smith for nme.com.