05) Thieves in the Temple 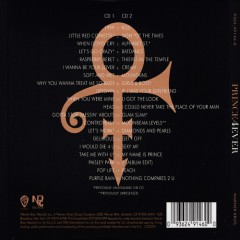 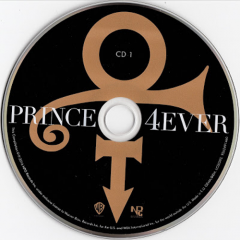 4Ever, also known as Prince 4Ever, is a greatest hits album by American recording artist Prince, released on November 22, 2016, by NPG Records and Warner Bros. Records. It is the first Prince release following the musician's death on April 21, 2016.

The two-disc set features 40 songs from Prince's tenure with Warner Bros. Records and features recordings from all of his albums between 1978's For You and 1993's The Hits/The B-Sides. It is the first Prince collection to include his number-one hit single "Batdance" from the soundtrack album to the 1989 film Batman.

4Ever features the first official release of the song "Moonbeam Levels", which had previously circulated on bootlegs of Prince's unreleased material in a low-quality form. The song had been recorded in 1982 during the sessions for 1999 and was subsequently considered for the unreleased 1989 album Rave unto the Joy Fantastic.

Album Review
Warner Brothers’ fourth Prince greatest hits compilation is a step up from 2002’s Very Best Of. Prince 4Ever is also Prince’s first music release following his death on April 21, 2016. Containing only songs spanning 1978 to 1993, it makes sound coverage of his most popular tracks and some not so obvious inclusions (namely Glam Slam and Peach), which is pleasing to see on the track list. Prince 4Ever contains 40 songs of which 39 are his best performing singles. Surprisingly, his highest charting UK single, The Most Beautiful Girl In The World, is not included. Warner don’t ever seem to acknowledge Prince’s releases through them post 1993. Although, it is refreshing to see Batdance is able to finally put in an appearance, given the licensing problems with the Batman soundtrack for previous greatest hits packages. Partyman therefore, is the second surprise omission. But despite this, the saving grace of Prince 4Ever (and 4ever owing itself to the inclusion of this) is the mother of all Prince outtakes Moonbeam Levels, elevating the e album to an impossible to resist purchase. For that is $Ever’s intent: to settle Prince’s unpaid tax. But don’t judge the album on one song alone, there are edited versions of singles not previously available in CD format, thus for the sake of completeness it is a worthy addition to Prince (or music fan’s) collection. As ever with compilations the quality of the album comes down to the selection of songs and you can tell with this release. Where it is obvious to include every crowdpleasing song and hit, to narrow a playlist down to just 40 from the era when Prince was at his peak, the tracks for Prince 4Ever were chosen out of genuine care and affection. It’s more the greatest hits for an entire musical decade. RIP Prince. You continue to astound us, even in death.