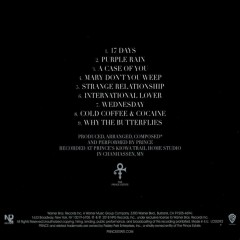 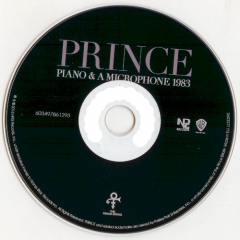 Piano and a Microphone 1983 is a posthumously released demo album by Prince, released on CD, vinyl, and digital formats on September 21, 2018. It is the first album released by the Prince estate with material from his archive, the Vault.

The album was discovered in Prince's vault at Paisley Park as a single cassette tape. The music was recorded in 1983 in one take at Prince's Kiowa Trail home studio in Chanhassen, Minnesota. The session was about 35 minutes of Prince's vocals while he played piano and segued between songs.

The session includes alternate versions of previously released and yet-to-be released songs, cover versions, and sketches of songs. The New York Times called it "a glimpse of a notoriously private artist doing his mysterious work."

Four of the album's nine tracks were previously unreleased - "Mary Don't You Weep", "Wednesday", "Cold Coffee & Cocaine", and "Why the Butterflies".

Album Review
Piano & A Microphone 1983 is the first release from The Estate. While sifting through the contents of Prince’s prised open vault it’s a lost tape rediscovered and contains nine songs. Prince played so continuously and fluidly on the piano the first half is recorded in medley and effortlessly rattled through and the last two recorded on the cassette’s Side Two when ran out of tape we hear him tell the engineer to ‘flip it over’ to continue the recording for the two final songs. It’s a tape of one of the hundreds of other demo and sessions which ended up squirrelled away for three decades but now it’s out it reveals the genesis of various keystones in his 80’s catalogue: namely 17 Days, Strange Relationship and Purple Rain. But let’s remember, why we’re hearing this only now is because of a tragedy. The sound quality (surprisingly good considering its less than ideal storage in Prince’s basement) gives it that ‘lost tape’ feel. The Blair Witch parallels continue, since the tone of the overall work is dark and lamenting. Yet what’s revealing about it, is that this is a surviving document of what Prince’s creative process sounds like. It’s personal, experimental and lays down newly worked tracks for future development. He clearly intended it never to be released, but let’s thank the Estate it is. Its intimacy is touching – it’s Prince, a piano and a microphone, the very format that inspired the final tour of his life. The year of this recording, 1983, is when Prince was on the verge of international stardom and this release was singled out by the archivist to mark these two facts, to bring his music catalogue full circle. The release contains four previously unreleased tracks (demos and likely the only versions of them he ever recorded) and are: Mary Don’t You Weep, soulful but tantalisingly too short; Wednesday, originally intended for inclusion as track five on Purple Rain is dark, almost a suicide note and was probably pulled for that reason. Cold Coffee & Cocaine is fun, sung in the vein of Jamie Starr, was intended to be given to a project for The Time; the last track Why The Butterflies, is undoubtedly the highlight of the album. Prince’s playing is wonderfully tight, of a real genius at work; Piano & A Microphone 1983 is a wonderful choice by the Estate to not give this great music the light of day, it reveals workings of Prince’s mind, that does not simply cash in on his musical legacy. The fact it’s been locks away for all these years, the best duty the Estate could perform Prince is to keep his music played. It will take years to catalogue the vault, but now he is gone let’s cherish and count your blessings this wonderful stockpile, now under careful curation, let’s Prince live on, as look forward to the many more such ‘lost tapes’ to come.