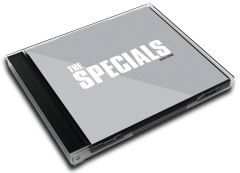 "Encore" is an album by English 2 Tone and ska revival band The Specials, released February 1st, 2019 on the Island label.
The first full-length studio release in nearly 18 years for the reformed British ska-punk band sees the return of Terry Hall to the line-up.
At Metacritic, which assigns a normalized rating out of 100 to reviews from critics, the album received an average score of 69, based on 7 reviews, indicating "generally favorable reviews".

Album Review
The Specials’ first album in four decades, it’s a ruthlessly entertaining, hugely outspoken, inspired and inspiring experience, one that doffs its cap to those iconic opening statements while remaining resolutely rooted in 2019.
It comes after those lengthy re-union tours, and more than a little of this energy is sprinkled on ‘Encore’. ‘Vote For Me’ is a rock solid groove, it’s slinking reggae rhythm underpining a wonderfully deadpan vocal from Terry Hall, in which he ruthlessly dissects the bankrupt motivations of a political class intent on driving British hopes and ambitions off a cliff-edge.
Terry Hall is strikingly open about mental health issues on ‘The Life And Times (Of A Man Called Depression)’, and perhaps the album’s most striking guest spot belongs to Saffiyah Khan, the activist who faced down an EDL facist wearing a Specials t-shirt.
Having lost Jerry Dammers, Neville Staple, and Roddy Radiation since their reformation, and with drummer John Bradbury dying in 2015, the cards were stacked against the band – yet from the very first note ‘Encore’ is superb, a joyous, addictive experience. Remarkably, it’s everything we’d want from a Specials album in 2019… and more.
Reviewed by Robin Murray for clashmusic.com.