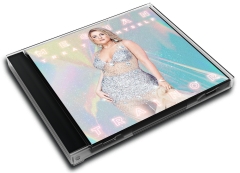 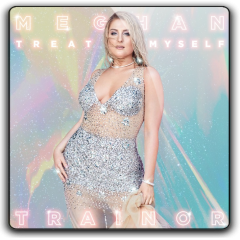 Treat Myself (stylized in all caps) is the third major-label studio album by American singer-songwriter Meghan Trainor, released on January 31, 2020. The album was originally scheduled for release on August 31, 2018, but was delayed due to Trainor wanting to add more songs. On January 7, 2019, the album was delayed even further. Later that year, Idolator reported that it was expected to be released in early 2020. Treat Myself was preceded by the release of two singles, "No Excuses" and "Wave", as well as the promotional singles, "Genetics", "Workin' On It", "Evil Twin" and "Blink". "Let You Be Right" and "Can't Dance" were intended to be on the album, but did not make it to the final cut while "All the Ways" and the title track, "Treat Myself", are included on the Target deluxe edition of the album. Trainor released the EP The Love Train, which includes the song "All the Ways", to make up for the delay of the album.

Background and writing
On delaying the album, Trainor stated in August 2018: "I'm in such an amazing place and I can't stop writing songs... I've decided to move my new album Treat Myself until I get everything out of my head and recorded in the studio." In November 2018, Trainor stated that she had worked with Sasha Sloan and Lennon Stella on a track for the album titled "Working On It", which she called "about loving yourself and just trying".

The album has been characterized as "filled with self-love anthems". Billboard called the title track a "bass-driven, fun-loving song that is the perfect soundtrack to any night out" and a "shimmering tune".

Singles
The lead single from the album, titled "No Excuses", was released on March 1, 2018. It is a pop song with country influences, described as a sexism-blasting empowerment anthem. The song peaked at number 46 on the US Billboard Hot 100. "Wave", featuring Mike Sabath, was released as the second single on September 27, 2019.

On January 22, 2020, Trainor announced in an Instagram live story that the second track on the album, entitled 'Nice to Meet Ya' featuring rapper Nicki Minaj, would be released as the third single from the album along with the album release on January 31, 2020.

Promotional singles
A number of songs were released as promotional singles, including "Genetics" on September 13, 2019 and "Workin' On It", featuring Lennon Stella and Sasha Sloan, on November 6, 2019. The original version of "Genetics" did not feature the Pussycat Dolls, who were subsequently added to the song ahead of the album's release. "Evil Twin" was released on December 13, 2019, while "Blink" was released on January 17, 2020.