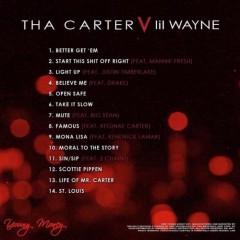 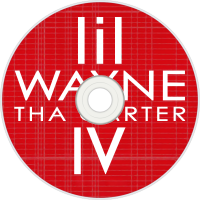 Tha Carter V is the twelfth studio album by American rapper Lil Wayne. It was released on September 28, 2018 by Young Money Entertainment and Republic Records. It is his first album to not be released by Cash Money Records. The albums features include XXXTentacion, Travis Scott, Nicki Minaj, Kendrick Lamar, Snoop Dogg, Ashanti, Mack Maine and Nivea, as well as uncredited vocals from 2 Chainz among others.

Originally planned to be released in 2014, Tha Carter V experienced several delays as a result of contractual disputes between Lil Wayne and Cash Money Records, as well as his numerous personal disputes with label-head, Birdman. Following a lengthy legal battle, Lil Wayne was confirmed to have been released from his contract with Cash Money in June 2018 and announced the release of the album in September.

Background
In November 2012, Lil Wayne announced Tha Carter V would be his final album; he previously stated he would retire at the age of 35; he explained that he had four kids and he "would feel selfish still going to the studio when it's such a vital point in their lives". In April 2014, Wayne addressed his Carter V release: "I personally plan on this being my final solo album, yes, and it's definitely the final Carter album. It's the final Carter album. It's stopping at five. I didn't smile when I said it...I plan on it being my final solo album. Whenever I have to pitch in for a Young Money album, a Like Father, Like Son album and something like that and maybe something out the blue, but the way I'm working on this album, it's to me, the way it seems like now, it seems like it'll be impossible for me to work this hard again for anything else."

In May 2014, when asked about Tha Carter V, Lil Wayne said the album is all about "growth" and that his music is "supposed to be personal": "Tha Carter V is about growth, flat-out. My thoughts are wiser. I still say what I want to say—it just sounds better and makes more sense. That all comes with growth and maturity. I never try to send messages through music. Music is about self. It's supposed to be personal, a reflection of me, unless you have somebody writing it for you, and everybody know I'm not that artist. I'm not sending a message because that message may not get across. Whatever message you take from it is your choice."

In July 2014, in an interview with XXL, he spoke about the album, saying: "I was feeling the success of Tha Carter I. I felt like people wanted to hear me. I was amped to do that, but then Tha Carter III? I don't know what happened. It was amazing. And then Tha Carter IV was just unexplainable, and now this one here, there are no words. I just hope everyone likes it. I'm always feeling like I ain't done shit. I'm still nervous about Tha Carter V...But I'm confident about what I do, though I'm still nervous about what people think."

Recording and production
In May 2014, Lil Wayne's longtime record producer, former Cash Money artist Mannie Fresh, announced he would be reuniting with Wayne on Tha Carter V. The collaboration marks the first time in 10 years that Fresh and Wayne worked together, not since 2004, when Wayne released Tha Carter and Fresh subsequently severed ties with the Cash Money Records. Also in May 2014, Atlanta-based rapper and producer Soulja Boy, who previously produced "Wowzerz" from I Am Not a Human Being II (2013) for Lil Wayne, announced he was working with Wayne on the fifth installment of Tha Carter series. In June 2014, Atlanta-based record producer Mike Will Made It, revealed "I got three records with Lil Wayne for Tha Carter V". In July 2014, Lil Wayne's frequent collaborator DVLP confirmed he had produced songs for Tha Carter V. While on the red carpet of the 2014 MTV Video Music Awards in California on August 24, West Coast hip hop producer DJ Mustard confirmed to MTV that Lil Wayne will be rapping over one of his beats on the album.