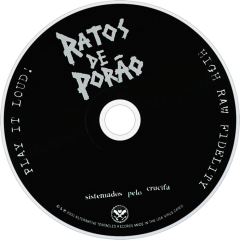 In 1999, the bassist Cristian "Fralda", who used to play in the punk rock band "Blind Pigs" joined the band, and they entered into the studio to re-record their first album, and called this album Sistemados Pelo Crucifa (a play on the original album title, "Crucificados Pelo Sistema"). The front cover was designed by the Korzus bass player Dick.