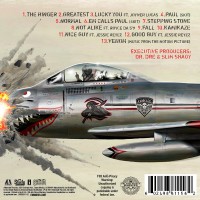 Kamikaze (stylized as KAMIKAZƎ) is the tenth studio album by American rapper Eminem. The album was released on August 31, 2018, through Aftermath Entertainment, Shady Records and Interscope Records.

Critical reception has been positive, with reviewers preferring it to Eminem's 2017 release Revival but criticizing him for being out of step with contemporary hip hop.

Recording and release
On January 8, 2018, Eminem unexpectedly released a remix to his Revival song, "Chloraseptic", featuring 2 Chainz and Phresher. In the song, Eminem mocked critics of Revival, concluding "I just added to the fuel in my rocket pack, till I'm ready to respond then I'ma launch it at 'em... I'll be back..." On January 22, 2018, photos revealed Mike Will Made-It in the studio with Eminem and Dr. Dre. The afternoon before Kamikaze's release, Eminem posted a 15-second teaser of a new song on social media, featuring the logo for the film Venom, without comment.

On August 31, 2018, he released the album to streaming music services Apple Music, Spotify, Google Play Music, and YouTube on the same day without any promotion or announcement. Eminem had previously debuted a freestyle rap at the 2017 BET Awards using similar lyrics to the eventual title track and he debuted a clothing line featuring "The Kamikaze" t-shirt the month prior.

The album art mimics the Beastie Boys' 1986 Licensed to Ill; Eminem has cited them as an inspiration for several years.

Guest star Justin Vernon of Bon Iver disavowed his participation in the album, claiming that he wasn't in the studio when the recording was assembled.

User Album Review
Hell hath no fury like a superstar rapper whose grand comeback receives a lukewarm reception from a once adoring public. Such is the message relayed, loudly and at length, on Eminem’s surprise new album Kamikaze – a high-kicking, low-punching riposte to the haters who shrugged off his deafeningly-hyped 2017 LP Revival as the sound of a middle-aged superstar treading water (in the ultimate humiliation it was unseated from the US charts by Taylor Swift’s Reputation).

“Are you really going just to deride everybody who…you don’t like what they have to say about you or the stuff you’re working on?” asks Eminem’s manager Paul Rosenberg in a voice message midway through this sharp and anger-fuelled record.

Eminem’s responds to Rosenberg with another voice mail several tracks later, venting his frustration towards a reviewer who questioned his abilities as a wordsmith. But it’s confirmation we don’t need as he has already unleashed his verbal water-cannon with impunity.

He rags on the journalists who failed to recognise the genius of Revival – in truth a bloated and tedious stab at reclaiming relevance – and then turns his sights on a younger generation of "Soundcloud" rhymers who, by Eminem’s telling, didn’t have things as hard as he coming up.

Those in the firing line include Drake, upbraided for, as per the rumours, employing a team of ghost-writers (“I don't say the hook unless I wrote the hook.”) and Tyler the Creator (“Tyler Create nothing”). Some of the disses are uncompromising even by Eminem standards – harking back to the days when the artist born Marshall Mathers achieved infamy with potshots against Paris Hilton and the sainted Moby.

Rappers have been bashing rappers since the dawn of hip hop. What elevates Kamikaze is the bareknuckle wit that Eminem made his trademark early in his career and his willingness to take on all targets.

“Somebody tell Budden before I stab he better fasten it, or have his body bag and zip the closest thing he's had to hits since smacking bitches…,” he bristles on the title track – an attack on fellow hip hop veteran Joe Budden which feels even more personal in light of the fact that the Kamikaze is released on Budden’s birthday.

Eminem also would seem to bear slightly baffling grudges against Lil Yachty (“Do you have any idea how much I hate this choppy flow everyone copies.”) and predicts the eventual demise of flavour-of-the-hour Post Malone (“to these kids you may as well not exist”).

One peer who hasn’t fallen foul of Eminem is Joyner Lucas, who created controversy with his 2017 viral hit I’m Not A Racist ("don't have pity for you black n_____s, that's the way I feel/ Screamin' Black Lives Matter / All the black guys rather be deadbeats than pay your bills…') and here joins Mathers on the husky and free-floating Lucky You.

A cap is meanwhile doffed to the Beastie Boys, with Kamikaze’s album sleeve apparently inspired by the cover of their Licensed To Ill LP from 1986. The similarity isn’t a coincidence as the fighter jet tail-fin on Licensed To Ill spells “3MTA3” (“Eat Me” in reverse) while Eminem’s proclaims TIKCU5 – “Suck It”
He also renews his attacks on Donald Trump, after whom the new album is presumably named given that in 2017 Eminem tweeted that the President was “a kamikaze that’ll probably cause a nuclear holocaust”. “Agent Orange just sent the secret service,” he says on opener The Ringer, raising the mildly surreal spectre of the FBI calling around to Eminem’s for tea and a stern chat.

The invective is paired with frequently sublime beats and big, chiming hooks. Critics’ darling Kendrick Lamar has a co-writing credit on Greatest (ironic as, several tracks later, Eminem takes aim at him by cattily mimicking a verse from Lamar’s DNA). And the finger prints of Dr Dre, Eminem’s long time mentor, can be felt in the velvety grooves underpinning The Ringer and Lucky You (Dre is listed as “executive producer”, with other studio credits going to Illadaproducer, Ronny J and Mike-Will Made It).

Emimen’s personal life has often been as lurid as his lyrics (he once cancelled a tour due to an addiction to sleeping pills). On The Ringer he recalls “hitting his 40s like a f_____g alcoholic, with a bottle of malt liquor”.
And he drops the bad boy braggadocio on Good Guy – addressed to a lover who “sticks a steak knife” in his heart and paired to a hook from Colombian-Canadian r’n b singer Jessie Reyez (whose solo material has commented on the failure of the #MeToo movement to take root in the music industry).

Only the by-numbers closing track Venom – recorded for the forthcoming Tom Hardy movie of the same name – feels like product tumbling off the hip hop production line.
“Surprise” album drops have turned into one of the most predictable gambits in pop, to the point where even the acknowledged master of the form Beyonce elicited groans when she and husband Jay Z unleashed their Carters album over the summer.

But Eminem has breathed new life into what has become a clunky stunt, with a record that punches hard and doesn’t care who it offends (“tried not to overthink this one,” Eminem tweeted announcing Kamikaze). At a time when hip hop has become the default music of choice for the masses, it’s a reminder of the genre’s subserve roots – and evidence that, deep into middle age, Slim Shady’s power to shock, offend and amuse endures.