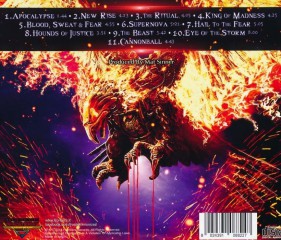 "Apocalypse" is the twelfth studio album by German heavy metal band Primal Fear. The album was released on August 10, 2018 on the Frontiers Records label.
Production of the record started at the end of 2017 and was wrapped by spring 2018 at Hansen Studios in Denmark with producer Sinner.

User Album Review
First up, the opening title track, “Apocalypse” enters via an ominous bell toll and religious-themed chant to intro the true Speed Metal frenzy of the aptly-titled “New Rise.” Sacramental, “The Ritual” makes a heavy segue for his majesty, the”King Of Madness.” In the midst of war, “Blood, Sweat, & Fear” is a blitzkrieg message to never sacrifice your own life in the face of misfortune. A black hole, the epic “Supernova” opens by way of dramatic piano and vocals for a cataclysmic ride into the void. Then, “Hail To The Fear” incorporates a nail-biting opening melody as this classic Metal rocker glorifies terror.
A Power Metal free-for-all, Primal Fear’s Apocalypse grants the universe another stunning display of what six incredibly skillful musicians can do when coming together to create music in this bright genre. A well-oiled machine, Scheepers’ vocal capacity over Karlsson’s narrative keyboards, matched alongside the cunning guitars of Naumann and Beyrodt, are held in place by the sound rhythms of Sinner and Jovino, giving fans yet another tightly wound and powerful release from Primal Fear.
Tried and true, Primal Fear stick with the Power Metal formula which has consistently worked for the band over the years. Needless to say, Apocalypse is not the end but merely a stark continuation in Primal Fear’s thriving odyssey. For these reasons, CrypticRock gives Apocalypse 4.5 out of 5 stars.
REviewed by Vito Tanzi for crypticrock.com.