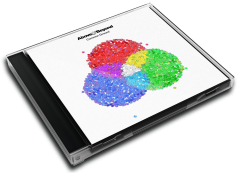 Common Ground is the sixth studio album by British progressive trance group Above & Beyond. It was released on 26 January 2018 on Anjunabeats. The album is their first studio album to feature new material since We Are All We Need (2015) and includes appearances from frequent collaborators Richard Bedford, Justine Suissa, and Zoë Johnston plus new guest vocalist Marty Longstaff.

In an interview with Billboard coinciding with Ultra Music Festival 2017, Above & Beyond revealed that the group was about "three-quarters of the way through" with their work on a new electronic album. The single "Tightrope" featuring Marty Longstaff and the title track "Common Ground" (originally titled "The Power of Vulnerability") were also premiered at Ultra 2017 and at the group's RC Cola Plant show two days before.

The confetti-inspired artwork style for the album was revealed with the release of "Tightrope" on 4 August and the following release of "My Own Hymn", accompanied by a lyric video, on 8 September.

The album title and cover were revealed at the end of the group's performance at their ABGT 250 event on 16 September 2017.

On 23 October 2017, the group announced the Common Ground North America Tour, which opened with a 3-hour set and appearances from Spencer Brown, Grum, and Gabriel & Dresden at the Los Angeles Convention Center on 29 December 2017 and will close at the RC Cola Plant in Miami accompanied by Seven Lions on 22 March 2018.

"Northern Soul", the third single from Common Ground, was released on 4 November with another lyric video.

The trio released the album's fourth single, "Always", on 19 January 2018. For this single's release, the group also released a music video featuring the three producers and vocalist Zoë Johnston performing the song in the French Alps. Also, the album version of "Is It Love? (1001)" was premiered that night by Pete Tong on BBC Radio 1's Essential Selection mix.

User Album Review
Today is an exciting day for fans of Above & Beyond, as it marks the release of the UK trance trio’s 4th studio album entitled “Common Ground”. The album drops exactly 3 years after their previous one (“We Are All We Need”), which was an absolute masterpiece. Tony McGuinness, Jono Grant and Paavo Siljamäki revealed the news of a new album in the making last September, after having released 3 new singles already earlier in the year: “Alright Now”, “Tightrope” and “My Own Hymn”. Alongside the news of the album, Above & Beyond announced a huge US “Common Ground” tour in support of the album, which already kicked off on December 29, 2017 at the Los Angeles Convention Center.

Regardless of their busy current touring schedule, Jono appeared on Armin van Buuren‘s A State Of Trance radio show (#850, part 1) last night, where he played 4 more tracks of “Common Ground”, including their brand new single “Always” ft. Zoë Johnston. Jono started off with “The Inconsistency Principle”, which is also the opening track of the album. It’s a great ambient chill-out track that flows seamlessly into “My Own Hymn” featuring the mesmerizing vocals of Zoë Johnston. Progressive trance at its very best, as Zoë has proven many times before when collaborating with Above & Beyond on most of their previous albums. Up next is “Northern Soul”, the band’s emotional ode to the city of Detroit, with the soulful vocals of Richard Bedford who fans have come to know (and love) on Above & Beyond classics like “Sun & Moon” and “Thing Called Love”.

The album continues with a track by another familiar face, being Justine Suissa, who Above & Beyond work with very often under their OceanLab moniker. “Naked” goes on to show what fans already knew for years, Suissa’s golden voice blends in perfectly with any progressive trance production of the trio. Synths and a heavy bassline take fans by the hand, as the track builds up to a progressive drop, guaranteed to rock any arena where the trio will tour next. Up next is “Sahara Love” (ft. Zoë Johnston once more), which adds a bit of a poppy vibe to its uplifting melody. “Happiness Amplified” brings back Richard Bedford’s vocals and adds even more synths to an already typical Above & Beyond progressive trance track, after which the album slows down to its midway point for a bit of a break.

Things get really interesting again with “Is It Love? (1001)”, as the track was already released back in March of 2017 – as an instrumental track. Tony, Jono and Paavo decided to add vocals to it and played it during their Above & Beyond Group Therapy #250 celebrations from the Gorge Amphitheatre. They left it up to Pete Tong to officially premier it on his BBC radio show just last week. Justine Suissa returns next for the vocals on “Cold Feet”, to be followed by the previously released single “Tightrope” ft. Marty Longstaff. The pace picks up again on “Alright Now”, Justine’s Suissa’s final appearance on the album. The track immediately received a club mix treatment after its release in September 2016, when Above & Beyond debuted it during their 200th episode of Group Therapy.

Another stunning performance of Richard Bedford is up next on “Bittersweet & Blue”, one of the absolute highlights of the album. The tracks’ deep lyrics make you wonder about the meaning of life and the song has a certain sadness to it, an emotion that Bedford is capable of bringing across perfectly. If you haven’t found yourself tearing up just yet, then the band’s latest single “Always” might cause you to grab a box of tissues due to its pure beauty. Above & Beyond have proven many times before that they aren’t shy of performing supreme acoustic sessions and “Always” is another perfect example of that. The accompanying stunning video is an absolute must-see as well. The album comes to an end with the title track “Common Ground”, a smooth instrumental outro to what has been an amazing adventure and a true masterpiece of Above & beyond and their featured artists once again.