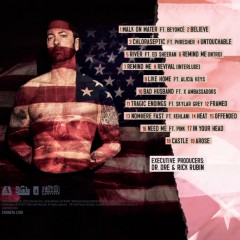 Revival is the ninth studio album by American rapper Eminem. The album was released on December 15, 2017 through Aftermath Entertainment, Shady Records and Interscope Records.

Revival debuted at number one in the UK, becoming the Christmas number-one album for 2017 there.

Background
Eminem first revealed that he was working on an album when he announced the song "Campaign Speech" on his Twitter in October 2016, writing, "Don't worry I'm working on an album! Here's something meanwhile." Rumors about the release date started in late 2016, saying the album would be called Success and would be released sometime in January 2017. A fake tracklist also was leaked at the same time. Rumors were sparked again in February and March 2017, when Eminem announced he was headlining three shows in Reading, Glasgow and Leeds. Various news articles said that because he was performing, he would have to release new material to perform, or at least preview, at the festivals.

Release and promotion
Well-built, performing African-American
A white man with a long, grey beard
Skylar Grey (left) and Rick Rubin (right) served as the album's producers.
On October 10, 2017, Eminem performed a freestyle titled "The Storm" at the 2017 BET Hip Hop Awards, criticizing President Donald Trump. The rapper's freestyle went viral, garnering millions of views and hundreds of thousands of likes on YouTube within weeks. As of December 16, 2017, the video has over 41 million views and over 1.1 million likes.

On October 25, 2017, Paul Rosenberg posted a photo to Instagram of Yelawolf's Trial by Fire. In the background of the photo, there is a billboard ad promoting a drug called "Revival." Suspicion was aroused when fans noticed that the 'E' in "Revival" was reversed, similar to Eminem's previous logos. Visiting the website listed on the billboard ad revealed several clues. On the website, a promotional video about "Revival" makes references to Eminem's song "Lose Yourself". The website also references "Sing for the Moment", "Brain Damage", "Fack", "Role Model", and "Any Man". According to the website, "Revival" treats "Atrox Rithimus," a nonexistent medical condition. One translation of Atrox Rithimus, from Latin, is 'terrible rhyme'. The website is also registered to one of Eminem's labels, Interscope Records. When the phone number for "Revival" is called, it plays the background music of Dr. Dre's "I Need a Doctor", which Eminem features on. These details led fans to believe Eminem's new album will be called Revival. This would follow suit with the names of two of his last three solo albums, Relapse and Recovery.

The album release date was teased multiple times, leading fans to wonder the release date. Then, on November 28, 2017, the release date of the album was announced to be December 15 via both Dr. Dre's and Eminem's social media accounts, while also revealing the fake drug campaign of the record. On December 5, 2017, Eminem shared a complete list of all the tracks featuring on his album via his Instagram account. The list features a total of 19 tracks, including an interlude track to Revival, featuring artists such as Phresher, Ed Sheeran, Skylar Grey, Alicia Keys, X Ambassadors, P!nk and Kehlani. On December 7, 2017, the album cover was revealed and projected onto a Detroit building. That night, the song "Untouchable" was released and a pre-order was set up on iTunes.

Singles
On November 8, 2017, Eminem tweeted a picture of a doctor's prescription note with the words "Walk on Water" and "Take as needed." written on it. Additionally, the doctor's note was labeled with the logo for Revival. This caused speculation that the first single would be titled "Walk on Water". On November 9, Paul Rosenberg shared a video on Instagram linking the drug "Revival" with "Walk on Water" and confirming the song, which was subsequently released the next day. An audio video was uploaded to Eminem's YouTube channel. As of December 16th, 2017, the video has nearly 50 million views and over 1.1 million likes.

In the United States, "Walk on Water" debuted at number 14 on the Billboard Hot 100, becoming the 57th entry for both artists on the chart. The song was first performed by Eminem at the 2017 MTV Europe Music Awards on November 12 with co-producer and writer Skylar Grey on vocals. Both performed the song and a melody of Stan/LoveTheWayYouLie on Saturday Night Live on November 18. Eminem stated on his website that he was going to release a new track on December 8, 2017, this led to the promotional single "Untouchable". The song features a sample from the song "Earache My Eye" by the comedy duo Cheech & Chong.

User Album Review
How do you prove yourself when there’s nothing left to prove? That’s the dilemma facing Eminem circa 2017, a career stage when — on the surface, at least — there would seem to be little to stoke the hunger that’s been crucial to his work for so long. By now, he’s scaled the heights, conquered the demons, etched his name in hip-hop’s annals.
So on “Revival,” his ninth studio album and first in four years, the Detroit rapper forages for fuel in a variety of other places, from politics to self-doubt to reconciliation with his past. It’s an uneven but generally rewarding effort that grows better the longer you immerse in it — an album that starts well, sags in the middle, and finishes in a spectacularly potent way.
It isn’t Eminem’s masterpiece, but it’s certainly no disaster, with high points that are strong enough to mitigate the low ones.
Reviewed by Brian McCollum for freep.com.