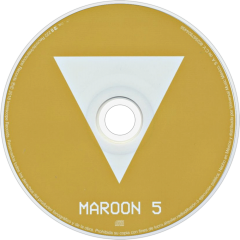 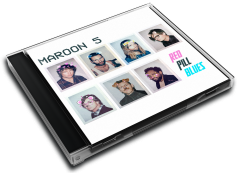 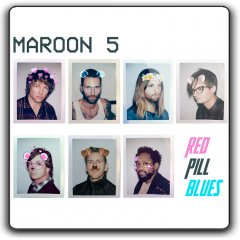 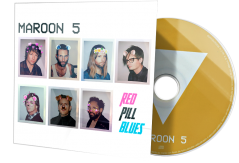 Red Pill Blues is the sixth studio album by American pop rock band Maroon 5. It was released on November 3, 2017, by 222 and Interscope Records. This is the band's first release to feature Sam Farrar as a studio member after becoming a touring member in 2012. The title of the album refers to the science fiction term of taking the red pill or the blue pill, which originated from the 1999 sci-fi film The Matrix.

Background
After touring in support of their fifth studio album V (2014) for over three years, Maroon 5 began planning a follow-up to V. Previously, the band had released two commercial singles. On October 11, 2016, the group released the tropical house single "Don't Wanna Know", featuring American rapper Kendrick Lamar. Another single, entitled "Cold", featuring American rapper Future, was released to digital retailers on February 14, 2017 and to Top 40 radio on February 21. After embarking on a short rescheduled headlining tour in North America in March 2017, the band began to finish recording new material for a sixth album at Conway Recording Studios in Los Angeles, California. The band began posting teaser gifs and videos on their social media accounts of members in the studio in late March.

At the 2017 Teen Choice Awards, held on August 13, 2017, Maroon 5 was honored the Decade Award. In his acceptance speech, frontman Adam Levine confirmed that their sixth album would be released in November. Levine later confirmed this in an interview with Zane Lowe on Apple Music radio station Beats 1. On October 4, 2017, the band announced pre-orders for the album to begin October 6.

Artwork
The album cover art is inspired by filters featured on the mobile application Snapchat. The cover depicts all seven members of Maroon 5 pictured on polaroid photographs with a filter on their faces. "We all use Snapchat, and the filters have become a huge part of the culture", frontman Adam Levine told Billboard in an October 2017 interview. "We thought it would be funny to take some more straight-ahead band photos and sprinkle in a little fun." Guitarist James Valentine added by saying "It's like, a part of the zeitgeist now. Adam and his wife, they just love trading photos when we're touring and stuff. They're always doing those filter faces to each other, so I think it rose out of that. Adam always has fun with that."

Singles
The album was preceded by two commercial stand-alone releases. "Don't Wanna Know", featuring American rapper Kendrick Lamar, was released to digital retailers on October 11, 2016 and charted at No. 6 on the U.S. Billboard Hot 100 and topped the Adult Top 40, Adult Contemporary, and Hot 100 Airplay charts. A music video for "Don't Wanna Know" premiered on October 14 on The Today Show.

A second stand-alone single, "Cold", featuring American rapper Future, was released on February 14, 2017, and charted at No. 16 on the Billboard Hot 100 and No. 5 on the Adult Top 40 chart. The music video for "Cold" premiered on February 15.

On August 30, 2017, the band released "What Lovers Do", featuring American R&B singer SZA, as the lead single from the album. A lyric video was uploaded on September 15, 2017, while the music video for the song premiered on September 28.

User Album Review
Adam Levine’s voice is one of the most benignly ubiquitous sounds in pop. It is air-conditioning, it is tap water, it is a thermostat set to 72 degrees. It’s coming, right now, from behind that potted plant over there. It doesn’t even belong to Levine’s throat alone—it is a sine wave that has also been loaned out to Akon, to Bruno Mars, to Nico & Vinz. It’s a voice that can sound vaguely like the Police, vaguely like Hall & Oates, or vaguely a young Michael Jackson. On 2012’s “One More Night,” it sounded vaguely like Rihanna. Forget his role as actual judge of singers—his voice has been its own franchise for years, rebooting itself year after year.

The fact that there is a band behind Levine, with lineup largely intact and original members miraculously unfired is a fact that seems to surprise even the band’s fans (they call themselves “Marooners.”) Here’s a fun test: Google “Maroon 5 members” and behold just how many results focus on the fact that yes, the band does have other members. It’s hard to blame these poor Marooners. Pulling my headphones off in the coffee shop where I was listening to this album, I discovered the same Maroon 5 single playing quietly over the system that I had just finished listening to. They are a piece of our built environment, and caring about them seems like a strange philosophical test: Can you care about bathwater or halogen lamps? Do you know that Maroon 5 has recorded five previous studio albums?

They have! Their sixth, Red Pill Blues, generated a groundswell of online response insofar as people wondered if the members knew that “the red pill” is a toxic term inextricably linked to the alt-right (turns out: No, they did not know this.) The band (for the record: Levine, along with Jesse Carmichael on keys and rhythm guitars; Mickey Madden on bass; James Valentine on lead and rhythm guitar; Matt Flynn on drums; and then PJ Morton and Sam Farrar on assorted other keys, MPCs, and filigree) have always had a shrewd and easy touch with soft rock, and opener “Best 4 U” reasserts their dominance here. The keys twinkle with a hint of wry humor; the guitars are there to remind you, distantly, of the existence of guitars, little dots and blobs surrounded by starchy white silence. Levine’s voice murmurs and glints in the corners of the arrangement, and the total effect is exactly as pleasingly immaculate and numbing as all soft rock should be.

The band themselves have always been tight and professional and smooth, and they remain truly excellent at this sound. But this sound alone, regrettably, doesn’t guarantee the kind of chart success that being Maroon 5 dictates. To help scale that mountain, which gets taller every album cycle, they’ve pulled several of One Direction’s songwriters into their orbit. That includes John Ryan, a covert pop operator who has landed co-writing credits on an impressive 27 1D songs and who also loosed Jason DeRulo’s unholy “Wiggle” into the universe. He pops up multiple times on Red Pill Blues, from the spiraling wind-tunnel “whoo-oo-oo” hook of “Wait” to the finger-picked guitar of One Direction dead ringer “Bet My Heart.”

Also pulled into the tractor beam is Starrah, whose onomatopoetic hooks on songs like Jeremih’s “Pass Dat,” Kevin Gates’ “2 Phones,” and Katy Perry’s “Swish Swish” pop up here on “Girls Like You” and “What Lovers Do.” Everything and everyone that pops up on a Maroon 5 album sounds somewhat leached of their essence, though—SZA duets with Levine on “What Lovers Do,” and somehow, that slightly anarchic mischief that enlivens and animates CTRL is gone completely. You wonder what filter they passed her vocal take through to render her so inert.

You also wonder, sadly, the same thing about Kendrick, who wanders through “Don’t Wanna Know” sounding pretty confused about how someone of his immense stature should be spending his cultural capital. A$AP Rocky, on the nonsensically worded ballad “Whiskey” (“I was so young/Till she kissed me, like I’m whiskey”), sounds equally lost, a designer t-shirt left in an Old Navy dressing room. Only Future sounds at home in these antiseptic environs.

It’s this utter lack of libido that ends up making Red Pill Blues so difficult to even finish. Soft rock and sex have a tricky relationship, and so do sex and Hot 100 pop. It’s the ostensible subject, or the ultimate aim, of 99% of the material, but actual, physical copulation is a nasty rumor to most of these songs. On “Lips on You,” Levine offers, in a gentlemanly way, to go down on you; the offer might be sexier if the heart-thump of the drum programming and the new age synth didn’t sound like Sting was servicing you in a Pier 1 Imports store.

The mixing on the album was done by Serban Ghenea, a secret-weapon pop engineer who has mixed hundreds of Hot 100 songs. His songs are distinguished by their naked-smooth surfaces that erase any hint of pumping blood. His work is astonishing, in its way, a series of swooping stainless steel curves that mark out our pop landscape. He’s a perfect partner for Levine, who sounds more appealing the more he transforms himself into a bouncing sound effect. On “Help Me Out,” he rackets around the twinkling synths in his head voice, sounding at least as nimble and half as human as they do. He is the perfect coach for a show simply called “The Voice:” disembodied, inhuman, he dances across the surface like laser light.