Cryptoriana – The Seductiveness of Decay 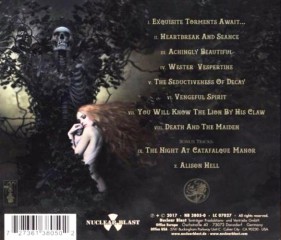 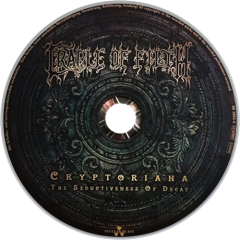 "Cryptoriana – The Seductiveness of Decay" is the twelfth studio album by the British extreme metal band Cradle of Filth. It was released on 22 September 2017 through Nuclear Blast Records.
Dani Filth said the album "is deeply infused with Victorian gothic horror and thus the title is a reflection of that. 'Cryptoriana' implies the Victorians' infatuation with the supernatural, the grave and the ghoulish. And the subtitle, 'The Seductiveness of Decay', further cements this attraction to death and the glittering lengthy process of self-annihilation".

User Album Review
If Cryptoriana can be accused of being disappointing, it’s only because it’s not a revelation on the same level as its predecessor. This is still Cradle of Filth combining elements of black, goth, melodeath, thrash, and power metal in a catchy and memorable cocktail of symphonic extreme metal that stands head and shoulders with the best of their older material. These compositions are defined by their dynamism; yes, they’re as lengthy as ever with most clocking in around seven minutes, but instances such as the melancholic black/aggressive thrash duality of “Wester Vespertine” and the surprisingly catchy, nearly post-rock vibe in the chorus of “You Will Know the Lion by His Claw” make for tracks that fly by so fast that many feel half their length. Part of this fleet feeling certainly comes from Cryptoriana‘s sheer riff count, which rivals the number of times Dani Filth has ever shoehorned the word “cunt” into his lyrics in what might just be the most guitar-driven record of CoF’s career.
Proving that Hammer’s success was no mere fluke, Cryptoriana is a clear signal that Cradle of Filth is currently in the middle of one of the best phases of their career, blending several genres with their trademark gothic atmosphere so effectively that it sounds deceptively simple in its execution.
Reviewed by angrymetalguy.com.