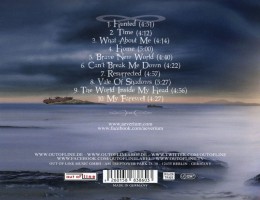 "Time" is the second full length studio album from Alternative-Metal-Band Aeverium, released 24 March 2017 through Out Of Line Music.
A Limited Edition was also releaesd featuring eight Acoustic Versions of five tracks from "Time" and three from "Break Out"

Album Review
On the second album „Time“, German Modern-Metal group Aeverium finds the perfect balance between anthemic symphonic sounds and contemporary harshness.
The well-received debut album „Break Out“ already effectively set Aeverium apart from the crowd The hammering power riffs and aggression of Modern- and Nu-Metal were expertly juxtaposed with catchy melodies and the elegiac bombast of Symphonic-Metal to forge one of the most refreshing hybrid sounds in recent Rock history, powered by an exceptionally talented duo on vocals. The second album “Time” is cannily built on the strong aspects of the debut, while elevating the unique fusion of styles to the next level. The hard parts were turned up a notch, the transition into the symphonic parts is executed even more smoothly and the explosive fusion of emotion, aggression and cinematic pomp is all the more intense. Furthermore, the hard riffs in tracks like “Hunted” or the potential hit “What About Me” are grounded on a pulsating electronic foundation that reminds of the early days of bands like Linkin Park or Disturbed. Front man Marcel “Chubby” Roemer is displaying an impressive vocal band width ranging from growls to powerful melodic belting which is effectively countered by the mesmerizing female voice of Aeva Maurelle who is delivering her full range from heavenly voices to a siren-like tour de force. -- Reviewed by poponaut.de