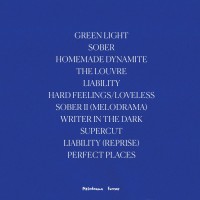 Melodrama is the second studio album by New Zealand singer Lorde, released on 16 June 2017 through Republic Records. Writing for the album began as early as December 2013 and continued through "false starts, fruitless detours and stretches of inactivity" as Lorde stepped back from the public spotlight, taking shape after her breakup from her longtime boyfriend James Lowe in 2015.

Melodrama has been described by critics as a loose concept album that explores the theme of solitude, in the framework of a single house party with the events and moods that entail it. Lorde wrote and produced the album alongside Jack Antonoff, with additional production contributions from Frank Dukes, Malay, Andrew Wyatt, Joel Little and Flume, among others. The album topped charts in New Zealand, Australia, the United States and Canada. Melodrama received widespread acclaim from critics, with some publications citing it as the best album of the year. It also received a Grammy Award nomination for Album of the Year at the 60th Annual Grammy Awards.

Jack Antonoff (pictured) co-wrote and produced a majority of Melodrama with Lorde.
In December 2013, Lorde announced that she had begun writing material for her second studio album. In June 2014, Lorde said that her second studio album was in its early stages and that, so far, it was "totally different" from her debut album. In November 2016, Lorde posted a Facebook update that read: "Writing Pure Heroine was my way of enshrining our teenage glory, putting it up in lights forever so that part of me never dies, and this record – well, this one is about what comes next. ...The party is about to start. I am about to show you the new world." Lorde revealed the title of the album on 2 March 2017. The album was recorded over an 18-month period with co-writer and producer Jack Antonoff.

The album is about a "grapple with loneliness" in the aftermath of a break-up, according to The New York Times. In the article, Lorde mentions that "Melodrama wasn’t a 'breakup album" and stated that "it’s a record about being alone. The good parts and the bad parts, dealing with themes of heartbreak and solitude". She did, however, call "Green Light" a traditional break-up song: "with all of my favorite artists, I’d much rather hear a story about the breakdown of a marriage than do the Googling about it. I love when artists are more mysterious".

In an interview with Vanity Fair magazine, Lorde discussed content of the album, as well as the title Melodrama, an allusion to Greek tragedy and performance art. She stated that the title is a "nod to the types of emotions you experience when you’re 19 or 20. I had such an intense two years, and everything I was feeling—whether it was crying or laughing or dancing or in love—each of them felt like the most concentrated version of that emotion. I also have a love of theater and I love drawing a parallel with Greek tragedies. But there’s definitely an element of tongue-in-cheek; it’s very funny to title your record Melodrama". Furthermore, she drew comparisons between this album and Pure Heroine, particularly in terms of the stylistic departures between the two: "it's a little more stylized than the first one. It’s really a collection of moments, thoughts, and vignettes when I said to myself, “Don’t forget this.” And it wasn’t until I went through heartbreak, and moved out of home into my own house and spent a lot of time totally alone, that I realized I do have very serious, vivid feelings I needed to get out. Working with Jack Antonoff opened me up to feeling a lot; he was the perfect person to help me do that".

Composition
"It's a break-up album, interspersed with a young woman's subsequent pitfalls with parties, emotion-less hook-ups and fame. Her most startling moment is the piano ballad Liability, where Lorde opens up about her intensity driving love away."
—Josh Leeson, The Herald
Lorde composed the songs on Melodrama in New Zealand. She described the album as addressing themes of heartbreak, solitude and loneliness. A majority of the album was written at the piano and took inspiration from Paul Simon's 1986 album, Graceland, Don Henley, Tom Petty, Phil Collins and Joni Mitchell. Lorde worked on the album in Jack Antonoff's home studio in New York City. According to a New York Times article, the singer has a "neurological condition known as sound-to-color synesthesia", and devised color codes to each song. It is also noted Lorde wanted to explore a "cathartic mode" for the album.

Though it has been denied by Lorde, Melodrama has been described by critics as a loose concept album. Lorde has stated Melodrama only has a loose narrative. It explores the theme of solitude, in the framework of a single house party with the events and moods that entail it. Pitchfork has called the album a "pop record full of grief and hedonism". Emily Reily of Paste described it as an "electropop triumph".

Melodrama opens with "Green Light" which is an electropop, dance-pop, and post-disco song. The song features titular metaphors with reviewers interpreting the "green light" as a street signal that gives the singer permission to move on into the future. "The Louvre" has been described by Entertainment Weekly as a song about the early stages of a casual relationship "doomed to fail". The song starts with Lorde's voice accompanied by a guitar, before becoming "a storm of glitchy electro-pop". "Liability" is described as a pop piano ballad, with Graeme Tuckett, writing for Stuff New Zealand, stating that "Liability is a break-up confessional, a diary entry of a song. It reads raw, stripped back, nicely under-produced – just a ballad-ish piano to accompany Lorde's voice this time – and particularly well sung." "Hard Feelings/Loveless" has been described as a two-part, self-aware breakup song that takes the "crazy ex-girlfriend" cliché to "Fatal Attraction-esque extremes". Slant Magazine's Sal Cinquemani described "Hard Feelings" as an "industrial-infused" song, and "Loveless" as "the most shamelessly poppy track that Lorde has recorded to date, peppered with prickly bon mots".