It Won't Be Soon Before Long

Track List
01) If I Never See Your Face Again 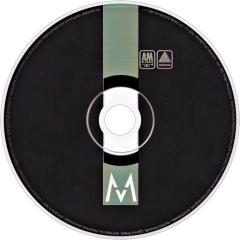 It Won't Be Soon Before Long is Maroon 5's second studio album, released on May 22, 2007. The name was inspired by a phrase the band adopted to keep themselves motivated while on their tour. The album debuted at number one on the U.S. Billboard 200, selling around 430,000 copies in its first week and, as of 2011, approximately 3,000,000 copies worldwide.

It Won't Be Soon Before Long has 12 songs, plus 6 bonus tracks. The band stated in interviews that the album has a different feel to it from the Songs About Jane. The songs are not all based on one specific relationship, as in Jane; and also have a different sound than their first album, being more electric and drawing inspiration from such artists as the Talking Heads, Michael Jackson and Prince. A review written prior to the album's release described the songs as having a very retro feel. Adam Levine explained that this record is a little more self-confident and powerful lyrically: "...you can dance to it, there's a little more attitude."

According to Levine working with other artists had influences on the album: "Kanye West and Alicia Keys are amazing talents, in totally different ways. Just seeing such amazing people working in the studio. I definitely took things away from them."

The chorus of "Nothing Lasts Forever" is the same used in the Kanye West single "Heard 'Em Say", which features Adam Levine with exclusion to the line, "...the distance between us makes it so hard to stay..." The song has also featured in a trailer for the movie Definitely, Maybe.

Album Review
College rock: A huge mainstay of US music scene and yet a concept that bewilders most of the UK, almost to the point of being an insult. Whereas we have indie guitar attitude and oodles of that unknown quantity; ’cool’, the yanks get slightly funky, hooky fun that wears its three quarter-length trousers with pride.
The key word here is funk. Maroon 5 have taken 5 years capitalising on their debut, Songs About Jane, and also keeping a close weather eye on what makes middle American youth shake their collective booty. And the kids want R ’n’ B. It Won’t be Soon Before Long gives it to you in spades. Well done guys, this is one smart move.
It Won’t… merges equal amounts of Counting Crows, Justin Timberlake and Outkast. It’s an amalgamation that’s taut, immediate, catchy and downright, good, clean fun. At times it approaches the condition of blue-eyed soul, though it’s possibly more Black Cherry than Hall and Oates.
This is no exercise in clever post-modernism. It’s a strong attempt to show you that the boys are back and ready to paaaaarty. What the lyrics lack in depth or insight the songs make up for in sheer dance- and hummability. “If I Never Have To See Your Face Again” and ”Makes Me Wonder” are monster weapons of mass-marketing aimed at the feet and riding on swathes of string-drenched, synth-crunching disco.
There’s a slight dip halfway through with “Won’t Go Home Without You” lounging in the plodding neighbourhood of Crowded House’s worst moments and “Nothing Lasts Forever” reminding one very strongly of about six other classics. But suddenly “Can’t Stop” shoves its way back into the room and it’s party time again. Phew…
Maybe we’re too cynical and cool about this kind of stuff. Noel Gallagher may have refused to tour with these lads, but on the strength of this, they’ll be laughing all the way to the bank while he ponders on why he failed to crack America.