03) Under the Sleeping Tree 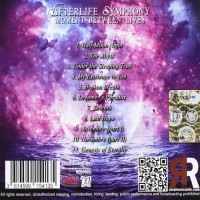 Album Review
Moment Between Lives, is a pleasing cross blend of Symphonic and Progressive female fronted metal. While some may be turned off by female fronted acts, vocalist Anna Giusto, has such charisma and a dark persona that it definitely makes for an interesting sound. There are elements that one would expect, heavier than thou riffs, pounding drums, structural arrangements and a large orchestral presence thanks to the keyboards. What sets this album a part from the other bands in similar realms is the extra layering of darkness, very grim and melancholic in some ways. Another aspect that threw me off was the absence of operatic vocals, which in this case turned out pretty well as most would assume such circumstances. Definitely for fans of the female fronted symphonic scene, their take on symphonic metal is slightly different to what else is out there, setting them slightly apart from the competition. At times I felt Anna held back but this is only their second album so hopefully the third time is a charm, as the saying goes. Overall, a soldi vocal performance and a strong performance overall from the remainder of the band. If you enjoy albums that give this ‘roller-coaster’ effect with some feeling attached to it, you’ll enjoy immersing yourself in Moments Between Lives.