Praises to the War Machine 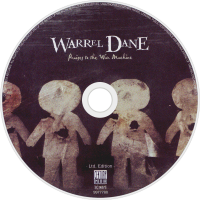 Praises to the War Machine is the debut solo release/album by heavy metal vocalist Warrel Dane from Nevermore, released on April 25, 2008. The album was produced by Peter Wichers, who was tapped by Dane to work on the album while Wichers was still a member of Soilwork. After leaving that band in 2007, Wichers co-wrote the album with Dane and played on eight of its tracks. Soilwork drummer Dirk Verbeuren and former Himsa guitarist Matt Wicklund also played on the album. Nevermore guitarist Jeff Loomis and James Murphy make guest appearances. Chris Broderick was supposed to contribute a solo to the track "Obey" but was unable to, due to other obligations. Praises to the War Machine includes two cover songs, The Sisters of Mercy's "Lucretia My Reflection" and "Patterns" by Paul Simon. Dane had previously covered a Simon song on Nevermore's album Dead Heart in a Dead World.

Dane was in the process of recording a follow-up to Praises to the War Machine at the time of his death in December 2017.

User Album Review
Singer Warrel Dane has been a fixture in the heavy metal community for so long (as far back as 1987, with Sanctuary, before embarking on a long '90s and 2000s tenure with Nevermore) that it's really rather remarkable that his first true solo album, Praises to the War Machine, didn't come into being until 2008. Actually born of an equitable collaboration with former Soilwork guitarist Peter Wichers, who co-wrote and produced the entire disc, Praises drips additional heavy metal credentials thanks to the participation of former Himsa guitarist Matt Wicklund and in-demand drummer Dirk Verbeuren (Scarve, Yyrkoon, Soilwork, etc.), yet doesn't curb its creative scope within strictly metallic parameters. Rather, even though Dane's stylistic roots are rarely invisible throughout, the album purposefully emphasizes songs that are neither as uniformly heavy nor as technically overwrought as the usual Nevermore working model. Examples of this range from immediate and memorable heavy rockers like "When We Pray," "Let You Down," and "August" to a few surprisingly introspective offerings like "Brother," "This Old Man," and the gorgeous "Your Chosen Misery" (featuring psychedelic nuances and baritone vocals that bring Canadians the Tea Party to mind), where the singer gets as openly personal as he has ever done on record. Dane also takes advantage of his solo billing to tackle two unlikely covers: an unrecognizably toughened-up version of Simon & Garfunkel's "Patterns" and the Sisters of Mercy's "Lucretia My Reflection," which is given the goth metal treatment à la Sentenced and Tiamat. And for those who simply must have their metallic fix, "Equilibrium" delivers a familiar head-banging album finale, while old friends like Nevermore partner Jeff Loomis and death metal icon James Murphy drop by to provide melodiously shredding solos for potential single "Messenger" and the cynical, aggressive "The Day the Rats Went to War." So there you have it: a nice balance between familiarity and surprise makes Praises to the War Machine a well-rounded solo endeavor, and a no-brainer for Warrel Dane fans of all stripes.
- Eduardo Rivadavia, allmusic.com