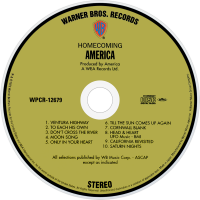 Homecoming is the second studio album by America, released on November 15, 1972 through Warner Bros. Records. Acoustic guitar-based, with a more pronounced electric guitar and keyboard section than their first album, their second effort helped continue the band's success, and includes one of their best known hits, "Ventura Highway".

Homecoming peaked at #9 on Billboard's Pop Albums Chart and was certified platinum by the RIAA. It produced three hit singles: "Ventura Highway" which peaked at #8 on the Billboard singles chart and #3 on the adult contemporary chart; "Don't Cross the River" which hit #35 on Billboard and #23 on the AC chart; and "Only in Your Heart" peaked at #62 on Billboard's Pop singles chart. Several other songs received radio airplay on FM stations playing album tracks, including "To Each His Own", "California Revisited", and "Cornwall Blank".

For this album and the next six throughout the next five years, the group traditionally chose titles beginning with the letter "H" (The self-titled debut album became unofficially included in this distinction when fans started referring to it as the "Horse With No Name" album when that track was added to later pressings)